Hawaiian operates at least three departures daily from McCarran International Airport. This flight from Las Vegas to Honolulu HA17 departs at 1:55am. Despite the unusual time, the gate agents announce its a full flight and would appreciate if passengers remain seated until their row number is called.

The business organization paid for the ticket but that doesn't mean I couldn't take advantage of situation and with a call a couple of days earlier to the airline, I upgraded again from a coach to a first class seat by redeeming 25,000 miles from my Hawaiian Miles account.

It should be noted that the call center for Hawaiian Airlines operates from the Philippines but the service is thorough and polite. Anybody expecting no waiting has never ever called a call center. But once I got a service agent, the request was expedited.

So unlike the first class meal service on HA18 that I flew to Vegas, the return trip had a different service. What do you serve at 2am in the morning? The flight attendants still distributed a menu but there was only one selection which reads as follows:

Moemoe menu
Light, quick and delicious, this snack features the tastes of Hawai'i and is perfectly proportioned to enjoy just before a restful sleep.

There was something comforting about this snack. It's warmth and light flavors was satisfying for the remainder of this six hour flight. There is no dessert or salad course but drinks still are poured freely.

Adding to the comfort is the mood lighting in blues and purples. No harsh fluorescents. I attempted to watch a movie "The Descendants" in an attempt to pass the time. The Airbus A330 is Hawaiian's newest jet and every seat has a personal monitor. In coach they are located on the seat backs. In first class they are in the arm rest and pop out with a gentle push.

Posted by The Hopeful Traveler at 4:06 PM 1 comments

Slot Machines at the Airport

Hawaiian Airlines departs from the "in need of an upgrade" Terminal 2 at McCarran International Airport. The word is airlines operating at these gates would be moved to the other terminals. The newly construction Terminal 3 is set to open in the coming months. Korean Air and AeroMexico are among the few airlines that operate at Terminal 2.

Each time I have visited Vegas, I always thought that finding slot machines in the terminal and near the departure gates seems like a punchline to vacation here. It's the last chance anyone here has to empty your wallet. I'm not tempted especially for a 1:55am departure when I'd rather be sleeping in bed.
Posted by The Hopeful Traveler at 1:04 AM 0 comments

At Night: The View From A Room at the Paris Las Vegas

My expectations were rather low when I learned at conference I would have attend was at the Paris Las Vegas Hotel. Things turned out for the better when after a first night in a room for smoking I was re-assigned a room that was on the 30th floor and corner room with spectacular views.

Over the course of my stay, I attempted to capture the view from my room at night. Compare these night views with the ones taken during the daytime by clicking HERE. (photos below: TheHopefulTraveler) 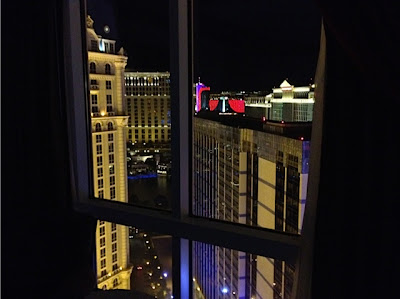 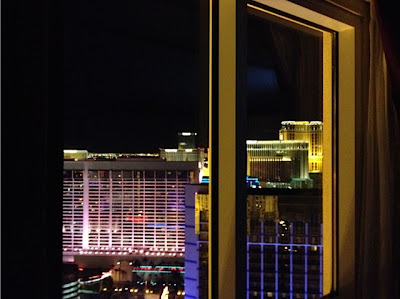 Posted by The Hopeful Traveler at 10:03 PM 0 comments

The Bellagio Las Vegas At Night

Still more time to spare before having to return to my room at the Paris Las Vegas and check-out so I take in another opportunity to take in the views offered at the Bellagio this at night. Click HERE for more photos and read the post "The Vegas Wonder of the Fountains of Bellagio." (photos below: TheHopefulTraveler)


Posted by The Hopeful Traveler at 9:38 PM 0 comments

A City of Light: The Paris Las Vegas at Night

With only a few hours left in my visit to Las Vegas, I take the time to view the Paris Las Vegas Hotel at night. I have to admit, I've largely dismissed this hotel as a poor facsimile of the city. But after staying at this property and being able to really see and admire the extravagant details, I've come to appreciate the design and architecture of the entire endeavor. No doubt my visit here was helped by the fact I was assigned at great room at the hotel.

So rather than go on, I'll just let these photos speak for themselves. As much as possible I've attempted to take similar photos to previous ones I have posted that were take in the daytime.

Posted by The Hopeful Traveler at 9:05 PM 0 comments

No detail was left unturned. The design theme of the Paris Las Vegas even covers the casino floor. The steel structures under which are located the gaming tables are representations of the Paris Metro station entrances and includes the names of real stations in the city.

These Metro entrances in the art nouveau style feature glass canopies and a cast-iron balustrade decorated in plant-like motifs. The designs date back to 1900 and some of these iconic station entrances have been given to other cities. They can be found in Montreal, Washington DC, Moscow and New York City. Replicas can be found in Lisbon, Mexico City and Chicago.
Posted by The Hopeful Traveler at 8:39 PM 0 comments

Most descriptions of the Paris Las Vegas Hotel cite the recreations of the Paris Opera House, Louvre, Eiffel Tower and Arc de Triomphe. I've published posts about these recreations and there are other replicas from Paris inside and out of the casino and I'll write about a couple more. The next post will cover the Metro stations copies at the Paris Las Vegas. This post is about the hotel's version of the Musee d'Orsay.

The recreation of the facade of the Musee d'Orsay is obscured by the hotel's Eiffel Tower and often goes unnoticed by visitors to the hotel. The facade is flanked on each side by the replica Louvre and Paris Opera House and serves as the main entrance to the hotel.

Musee is the French word for museum and the Musee d'Orsay is housed in the former train station (Gare D'Orsay), which explains the town names and therefore train destinations, that are etched into the building's Beaux-Arts-style exterior. The railway station was completed in 1900 but by 1939 the short platforms made it unsuitable for longer trains. After various uses and then much debate before extensive interior design work, the museum opened in 1986. The museum holds some of the most famous pantings by Van Gogh, Renoir, Manet, Cezanne, Monet, Gaugin and Seurat.

Visit musee-orsay.fr for more info about the museum.

Posted by The Hopeful Traveler at 8:01 PM 0 comments

ATMs At Your Service in the Casino 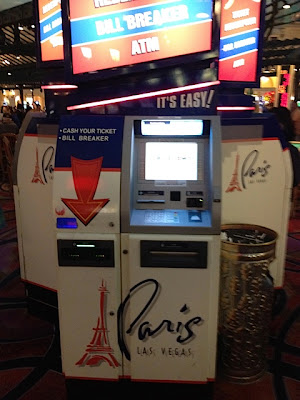 There is no denying that these ATMs located in each casino including the Paris Las Vegas probably took over the job of more than cashier. Need money or to cash your winnings, this machine does does both. Just follow the on-screen instructions. If you don't trust these machines, traditional human cashiers are still available on the casino floor. I'm heading back to Vegas next month for a real vacation since this trip was to attend a conference. I'll write a more detailed post about these machines then.
Posted by The Hopeful Traveler at 7:51 PM 0 comments

At every major hotel on the Las Vegas Strip, the true attraction is the casino. It's where the profits of a hotel rises and falls along the wallets of guests and visitors. The unusual look of the 85,000 square foot casino at the Paris Las Vegas Hotel is marked by three legs of the replica Eiffel Tower coming through the roof and planting its feet on the gaming floor.

All the gambling diversions are here including 100 table games, a race and sports book and more than 2,200 slot machines. The 40-foot high ceiling, painted to emulate a Parisian sky, encloses the casino's cobblestone pathways, ornate street signs and replica of the Pont Alexandre III bridge.

It wouldn't be right to visit Las Vegas and not gamble even if it's only at the rows of slot machines. So with a few more hours to spare before checking out, I attempted to at least break even on about four hundred dollars. For the first time I came out ahead and knew to stop at that point. Then it was off to take in the another last look at Las Vegas Boulevard at night.

Posted by The Hopeful Traveler at 7:23 PM 0 comments