Movies To Travel By: "Midnight In Paris" 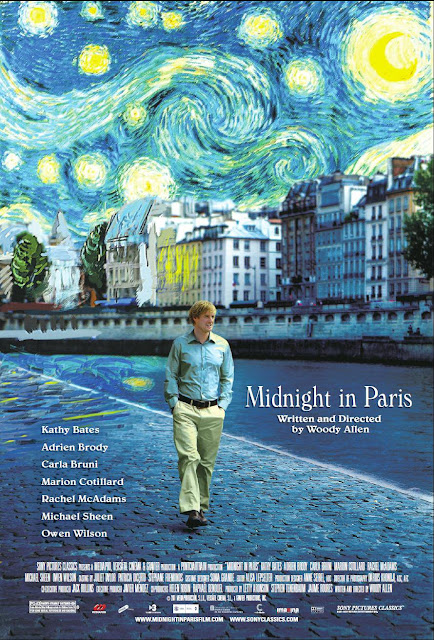 We all likely have a romantic vision of Paris. Woody Allen captures that feeling in the first ten minutes of his 2011 film "Midnight in Paris" offering postcard view after view of the "city of light." It's almost worth the admission just to admire these picture perfect images of Paris even after the story begins and characters begin inhabiting the foreground.

"Midnight in Paris" is a romantic comedy fantasy and to reveal its story is likely to reveal its surprises. In his four-star review of the film, Roger Ebert indicates in his first sentence that the review contains spoilers and that he can't imagine a way to review the film without discussing the delightful fantasy at the heart of Allen's new film.

Without giving much away, here's an excerpt from Ebert's review: "The film is sort of a daydream for American lit majors. It opens with a couple on holiday in Paris with her parents. Gil (Owen Wilson) and Inez (Rachel McAdams) are officially in love, but maybe what Gil really loves is Paris in the springtime. He's a hack screenwriter from Hollywood who still harbors the dream of someday writing a good novel and joining the pantheon of American writers whose ghosts seem to linger in the very air he breathes...He'd like to live in Paris. Inez would like to live in an upper-class American suburb...One night, he wanders off by himself, gets lost, sits on some church steps, and as a bell rings midnight, a big old Peugot pulls up filled with revelers."

The story then takes a turn that is one of the most magical and whimsical in recent moviemaking years. It is one of the best films of 2011 and among the best of Woody Allen's career.

Film locations, beautifully photographed by cinematographer Darius Khondji, include the Palace at Versailles, Sacre-Coeur, Ile de la Cite, Giverny, John XXIII Square near Notre Dame, and the streets near the Pantheon. Even the Hotel le Bristol where Gil and Inez stay contains images of luxurious accommodations that we can only dream about. Quaint street makets and fine restaurants complete the wonderful locales in the film. The first scene with Gil and Inez includes images of a Monet painting come to life. Visit movie-locations.com for more details of the film's various location.

"Midnight in Paris" is Woody Allen's highest grossing film domestically and internationally. Its global box office stands at over $151 million. The film was nominated for four Academy Awards including best picture winning the Oscar for best original screenplay.

Woody Allen took care in casting all the roles. Besides Wilson and McAdams, Kurt Fuller and Mimi Kennedy play the parents of Inez. Great supporting work is provided by Michael Sheen, Alison Pill, Tom Hiddleston, Kathy Bates, Marion Cotillard, Adrien Brody and Lea Seydoux. Even Carla Bruni, who was the First Lady of France at the time of filming, is excellent in her few scenes as a tour guide at the Rodin Museum.

Two actors who should expect more roles to come their way are Corey Stoll (spoiler warning: he plays Ernest Hemingway) and Nina Arianda as Carol, a friend of Gil and Inez, both of whom make great impressions onscreen in their few scenes. But it is Wilson who carries the film with his quiet charm.

Posted by The Hopeful Traveler at 11:31 AM 1 comments

Labels: Film and TV, France Attractions, Movies to Travel By

After reviewing 'Spring Awakening' this week, this gives me the opportunity publish a post about Manoa Valley Theatre. The venue bills itself as "Honolulu's 150-Seat, Off-Broadway Playhouse" and that is for the most part true. This complements the productions at Diamond Head Theatre, also located in Honolulu, which often presents local premieres and revivals of big-budget Broadway musicals. Both theatre companies however can and have presented both Broadway and off-Broadway productions.

MVT was founded in 1969 by graduate students of the University of Hawaii as the Hawaii Performing Arts Company. The Manoa Valley Theatre name was not adopted until the company's second decade and named for the lush, green valley where their venue is located.

Manoa Valley Theatre presents an annual six-show season. The 2011-2012 season includes Hawaii premieres of 'The 39 Steps,' 'God of Carnage,' and 'Spring Awakening'. 'Little Shop of Horrors,' 'Dividing the Estate' and 'Honk!' make up the balance of the current season.

The theatre company occupies land on which a former church stood and evidence that remains is the cemetery and church bell monument that fronts the theatre facilities. Seating for each show can be different as required by the production requirements. Audiences should always inquire if the seating is traditional or in-the-round or cabaret. None of the seating is reserved so it's first come first served with subscribers allowed priority entry.

I used to be a subscriber of Manoa Valley Theatre but due to cost of subscriptions, play selections and their reliance on cabaret type and audience participation productions, I opted to only attend select productions. As much as I love theater I made the difficult choice of subscribing to only one of Hawaii's two major theatre companies. Both Manoa Valley Theatre and Diamond Head Theatre offers the opportunity for local audiences to see New York productions once the rights become available.

Performances usually run evenings Thursdays to Saturdays and matinees on Saturdays and Sundays. The theatre has no parking facility so as a courtesy audiences are allowed to park in stalls near East Manoa Road at the neighboring Manoa Marketplace shopping center.

Visit manoavalleytheatre.com or call 808-988-6131 for more info. The theatre is located at 2833 East Manoa Road in Honolulu, Hawaii.

Posted by The Hopeful Traveler at 11:28 PM 0 comments 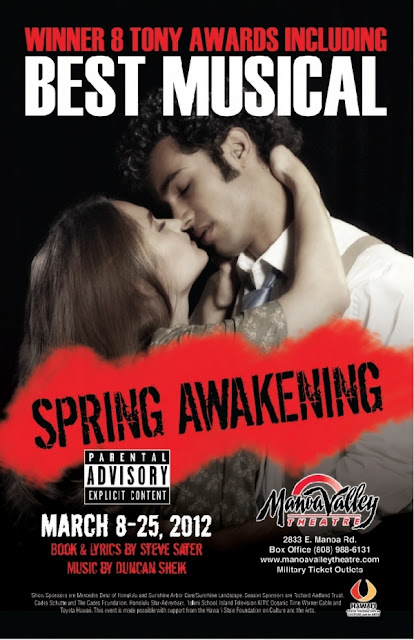 When Manoa Valley Theatre in Honolulu announced the Hawaii premiere of the musical ‘Spring Awakening’ as part of their 2011-2012 season, there was a question if the show would remain as provocative in a community theatre as when it premiered in New York City in 2006.

Audiences can be assured that the local creative team behind this ‘Spring Awakening’ have not tinkered with the subject matter and will likely surprise or even stun those unfamiliar with the work.

The musical retains its 19th century European time period and MVT costume designer Dusty Behner have dressed the actors appropriately: the girls covered in long dresses (think “Little House on the Prairie”) and the boys in matching black school uniforms. This plays in stark contrast to composer Duncan Sheik and book writer/lyricist Steven Sater’s pop-rock songs and the set designed by Andrew Doan that splits the stage into two levels. Most of the action takes place in front of white walls that span the length of the stage upon which the cast fills with graffiti throughout the performance. The upper level playing area has a background depicting buildings and structures of the era.

Leading the excellently chosen young cast is Elise Levin and Jonah Ho’okano. Levin plays the innocent and questioning Wendla who by her curiosity entices her radical classmate Melchior (Ho’okano). No doubt their scene at the end of act one will be the controversial talk during intermission. Both are fine actors who never once appear coy or uncomfortable in their roles.

Another storyline follows Moritz, a doomed student played by Garett Taketa who seems oddly a bit more mature than his co-stars but reveals a confused vulnerability. Among the peripheral players Joel Libed as Hanschen offers moments of comic relief. His arrogance in his scene with the fragile Ernst (Gerald Mandac) is tempered to reveal depth and poignancy.

Craig Howes and Liz Stone play all the adult roles and though they competently play the authority figures, both fail to punch up their dialogue losing several moments of humor and insight into the morals of the time.

But it’s the songs of Sheik and Slater that will entrance audiences. Titles such as “The Bitch of Living” and “Totally Fucked” may aim to shock but become show stoppers for the cast. Just as captivating are “My Junk” and “Don’t Do Sadness/Blue Wind”. Its score is one of the most unique, memorable and has no comparison that has played the Great White Way. Many may akin the music to Jonathan Larson’s “Rent” but the scores are not similar and comparison unfair. There’s moodiness in Sheik’s score that is very different to Larson’s music.

Unusual and fascinating, ‘Spring Awakening’ is likely to attract audiences especially through word of mouth among the students at nearby schools and University of Hawaii. An extension would be in order in hopes that many others will be willing to take a chance and discover this Tony Award winning best musical.  MVT takes a gamble and produces a version that is different from the Broadway original and it pays off artistically and critically.

Posted by The Hopeful Traveler at 8:47 PM 0 comments

In response to checked-bag fees and more passengers boarding with larger carry-on bags, many airlines have replaced overhead bins with larger ones or will usher in new jets with expanded bins.

The Associated Press reports the following:
At the same time airlines may be getting tougher in enforcing carry-on bag rules. It is reported that if you cannot find space for your carry-on bag in an overhead bin or under the seat in front of you, you may no choice other than to check your bag. Be careful because airlines may still be able to charge you a checked bag fee even if you have to check it at the gate. In the cabin, flight attendants may or may not be available to help you search for space for your carry-on bag in the cabin.

Note: The MSNBC video below may not play on mobile devices.

Visit msnbc.com for breaking news, world news, and news about the economy
Posted by The Hopeful Traveler at 4:48 PM 0 comments