In the past couple of years, the West End musicals 'Les Miserables' and 'The Phantom of the Opera' celebrated 25 years on the London stage and still counting. But there is one show that has run 35 years longer. Running on the West End since November 25, 1952 Agatha Christie's 'The Mousetraip' is currently celebrating 60 years and the show's producers are the marking the diamond jubilee with events through the year. 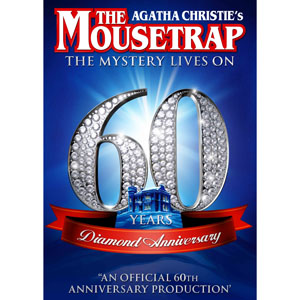 Seen by 10 million people and running over 23,000 performance, the play is currently presented at St. Martin's Theatre. Marked by its brilliantly intricate plot where murder lurks around every corner, the whodunit has become of the greatest pieces of theatrical history. It's title as long run champion in London was first attained on 1958.

During the record-breaking run, almost 300 actors and actresses have appeared in the play, 86 miles of shirts have been ironed and over 320 tons of ice cream sold at the show. The set had to be replaced in 2000 but it still has the same design as the original and the task completed over a weekend without the loss of a single performance.

The show has seen the Cold War, Queen Elizabeth II's coronation and survived 12 British Prime Ministers. For the year-long 60th year celebration, the show producers announced it will begin its first ever tour of the UK in September 2012.

Another interesting fact about 'The Mousetrap': Agatha Christie gave the rights to her grandson Matthew Prichard as a birthday present and she stipulated that only one version could be performed outside of the West End annually.

Posted by The Hopeful Traveler at 5:48 PM 0 comments 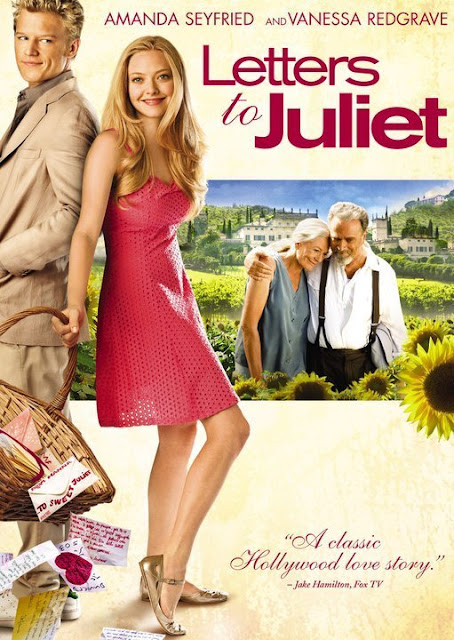 A sweet, wistful romantic comedy, "Letters to Juliet" stars Amanda Seyfried (“Mamma Mia”) as Sophie, a fact checker for the New Yorker, on a pre-engagement vacation with her fiancée (Gael Garcia Bernal). She stumbles upon the courtyard of William Shakespeare’s Juliet in Verona and learns of the Secretaries of Juliet who answers the letters pinned to the courtyard walls by visitors who have been forsaken by love.

Sophie finds a letter written 50 years ago by Claire (Vanessa Redgrave) and with the blessing of the secretaries answers the letter. Claire, with her grandson (Christopher Egan) in tow, returns to Italy in search of her lost love. With Sophie, the three embark on a journey that is is beautifully photographed through bountiful picture postcard settings in Verona and the Tuscan countryside.

In his review (three out of four stars), Roger Ebert writes: “I know (the film) is a soppy melodrama, and I don't mind in the least. I know the ending is preordained from the setup. I know the characters are broad and comforting stereotypes. In this case, I simply don't care...All of this is wrapped up in imaginably beautiful shots of the countryside, the warmth of the friendship between Sophie and Claire, and visits to many of the men named Lorenzo Bartolini, which was the name of the boy Claire loved so long ago.”

In the DVD extras, we learn that after Hollywood popularized the legend of Romeo and Juliet (starting with the 1936 version Oscar nominated for best picture directed by George Cukor), an enterprising museum director thought he would help visitors to Verona meet their expectations. He remodeled Juliet’s house which was a rundown tavern. He constructed a balcony out of 14th century sarcophagi and recovered a gothic portal and rose window so that the house would resemble a medieval building.

At around the same time the custodian of Juliet’s tomb planted rose bushes, taught turtle doves to land on tourists shoulders and would accompany tourists on their visit. People would write letters about how they enjoyed their visit and he would answer them as the secretary to Juliet.

Though the secretaries in the film work above the Trattoria Lettere a Giulietta, this restaurant is a fictional place. The secretaries do exist today however. Called The Juliet Club, the volunteers of the association promote the legend of Romeo and Juliet and reply to thousands offering advice and support.

The film is based on the book "Letters to Juliet: Celebrating Shakespeare's Greatest Heroine, the Magical City of Verona, and the Power of Love by Lisa Friedman and Ceil Friedman which tells of these letters and the volunteers who have been writing responses for over seven decades.

Spoiler Alert: Ebert points out an irony in the casting of Lorenzo for the film. Played by Franco Nero, he and Redgrave starred in the movie musical “Camelot” in 1967 as Guenevere and Lancelot. From his review: “So you see, when Vanessa marries Franco 40 years after falling in love with him, and they are playing characters who meet after 50 years, and this all has to do with Juliet’s balcony – reader, what am I to do? I am helpless before such forces.”

The DVD / Blu-ray extras include:
- "The Making of Letters to Juliet: In Italia"
- "A Courtyard in Verona"
- Audio Commentary with Director Gary Winick and Amanda Seyfried
- Deleted and Extended Scenes


Posted by The Hopeful Traveler at 10:30 PM 0 comments

As another year is upon many of us are already planning trips for the year and thinking about the cost and ways to save on a vacation. Rick Seaney, airfare expert, reported in USA Today last month about cheap flight deals during airline dead zones.

He recommends figuring out when everyone wants to fly, and then travel in the opposite season. Summer is popular therefore winter is a dead zone. But he cautions that peak holiday periods don't count.

As a rule, Seaney indicates that the best dead zone travel prices occur in the 'dead of winter'.

The best times to shop for dead zone deals is at least three weeks before travel since sales for these periods require a 21-day advance purchase. The exception to the winter dead zone rule are to popular ski resort destinations and to places where people are seeking to escape the cold. So rule out Hawaii and the Caribbean.

Click HERE to read the full article.
Posted by The Hopeful Traveler at 6:54 PM 2 comments