The final main roles in the big screen adaption of the hit musical 'Les Miserables' have fallen into place with the final piece being the casting of the coveted role of Eponine. Samantha Banks who played the role in London's West End and in the 25th Anniversary Concert is reported to have beat out high-profile names including Scarlett Johansson, Lea Michele, Evan Rachel Wood and Taylor Swift. It appears with this bit of casting few are arguing the choices for the film's cast as we all finally look forward to this screen adaptation after more than 25 years since the stage musical premiered in London in 1985.

The cast will also include Colm Wilkinson, the original stage Valjean, as the Bishop of Digne and Frances Rufelle, the original stage Eponine, who will play a prostitute. Other London stage actors to appear in the film include Kerry Ellis, Linzi Hately, Bertie Carvel and Alistair Brammer.

Click HERE to for the Daily Mail article about the surprising onstage announcement of Banks wining the role of Eponine.

Posted by The Hopeful Traveler at 6:26 PM 0 comments

The marquee of the Majestic Theatre in New York City got a makeover late in December. For 'The Phantom of the Opera's' 25th year on the Great White Way, the new Phantom logo which advertising company Dewynters refreshed for London has now been adopted for the show's Broadway home.

The former version was the white mask on a black background. The newer logo is much brighter with the mask enlarged on a blue-colored background. For more photos, visit BroadwayWorld.com. For info about the advertising company for 'Phantom', visit Dewynters.com.

Dewynters is responsible for some of the most iconic advertising artwork for theatre in New York and London which includes the waif for 'Les Misereables', the brush-stroked helicopter for 'Miss Saigon', the girl in the wedding dress for 'Mamma Mia' and the feline's eyes for 'Cats'. Below right is the old version of the 'Phantom' logo. 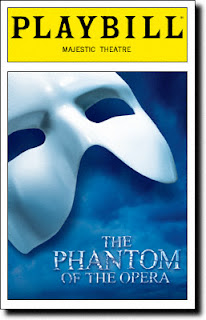 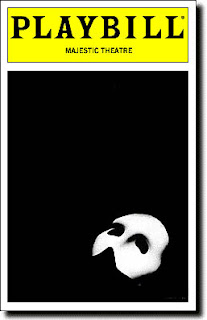 Posted by The Hopeful Traveler at 11:05 PM 0 comments

Barnes & Noble Exclusive: The Phantom of the Opera at the Albert Hall on DVD and Blu-ray

The latest Barnes & Noble exclusive is the DVD/Blu-ray release of "The Phantom of the Opera at the Albert Hall in Celebration of 25 Years". Unlike their exclusive CD releases of the 2008 'South Pacific' and 2009 'West Side Story' New Broadway Cast Recordings, the Phantom 25th DVD/Blu-ray discs themselves do not include any additional material and includes all the same material sold at other stores and online.

The B&N exclusive is a bonus 24-page mini-reproduction of the celebration's souvenir program. The program does not includes only highlight pages from the original program sold at the show.. But what makes this mini program a collectible is the credit for Wendy Ferguon who played Carlotta at the event. Due to an illness, the scheduled actress, Keira Duffy, could not perform. However Duffy's name and photo had already been included in the printing of the original full-sized programs.

Click HERE to purchase the DVD or HERE for the Blu-ray from barnesandnoble.com. Be sure the product description online says "Barnes & Noble Exclusive". The version I purchased at my local B&N store had no sticker or anything on the cover to indicate it as such. But the sales associate assured me the program was included and indeed it was once I opened the packaging. 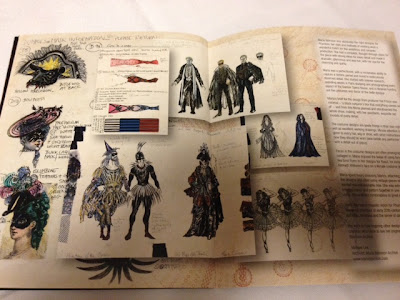 COMMENTS ON EXCLUSIVE RELEASES
Now I have mixed feelings regarding these exclusives. First of all the exclusive versions are not widely publicized so you may have already purchased the item elsewhere not knowing there was an exclusive and being a collector you may have to pay for another copy to obtain the additional material.

Secondly these exclusives can get out of hand if you are looking for a definitive version. For example Sony Masterworks released three versions of the 2009 'West Side Story' New Broadway Cast Recording. There was the standard version sold in most stores that included 16 tracks. Then there was the iTunes release which included 18 tracks. The two additional songs was "A Boy LIke That/I Have a Love" sung in English (in the show the song is performed in Spanish) and "Jump" instrumental track. 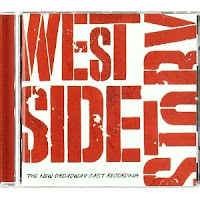 However the Barnes & Noble release of the recording included 19 tracks. The three additional tracks were different from the bonus tracks on the iTunes release: "I Feel Pretty" sung in English (this song also performed in Spanish in the show) and two instrumental tracks of "Somewhere" and "Tonight".

Thirdly these exclusives are limited releases so once they're gone, they're gone. Luckily the iTunes version of this 'West Side Story' is still available but if you already own the CD, you would have to purchase the entire recording on iTunes. The bonus tracks are not available for individual sale.

If you do get these exclusives and know that they are such, you will probably feel you got something extra rare once the original stock is sold out.

I am happy I was aware of these and other exclusives sold at these stores as I was able to purchase them before they were no longer available. However I know I would be disappointed if I was a fan of these productions and lost out on getting one of the exclusives.
Posted by The Hopeful Traveler at 9:28 PM 0 comments

According to the Transportation Security Administration (TSA), $409,085.56 in loose change was forgotten or intentionally left at airport checkpoints. As reported by the Gannett Washington Bureau, this is how it breaks down: $376,480.39 in dollar coins, quarters, dimes, nickels and pennies, plus foreign currency worth $32,605.17.

Those who leave loose coins at the airport are likely rushing for a flight or foreign travelers returning home who may feel they no longer have any use for U.S. change. The Gannett report adds that it may be because coins are no longer appealing in an increasingly cashless society and it weighs down pockets and purses.

By airport here is where passengers left the most change in 2010:


It's like those plastic bowls at security checkpoints have become TSA tip jars. But a TSA spokesperson indicated they should make every effort to reunite passengers with items left at checkpoints. Money that cannot be returned is used to finance the agency's operations. Republican Representative Jeff Miller of Florida is proposing the money go the United Service Organizations to help operate their welcome centers for U.S. military personnel around the world.

Posted by The Hopeful Traveler at 5:44 AM 0 comments