This month crews completed filming the Australian production of 'Love Never Dies,' Andrew Lloyd Webber's musical that continues the story of 'The Phantom of the Opera.' Though the Australian production will close at the Regent Theatre in Melbourne on December 18 and reopen at Sydney's Capitol Theatre in January 2012, the intention of the filming is for a global DVD release. 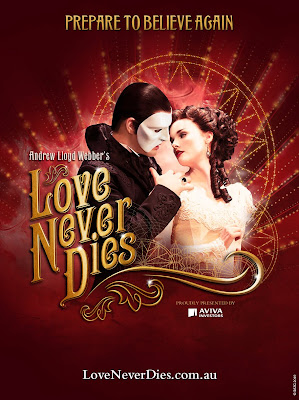 The release date has not been announced. The Australian version of 'Love Never Dies' is a completely new production and different than the version that opened in London in March 2010 to cool critical response and closed on August 27th. The London version went on hiatus to install changes to improve production but did not prove to extend the life of the production. The failure of the 'Love Never Dies' in London scuttled an announced Broadway production that was to open in November 2010.

The Australian 'Love Never Dies' is directed by Simon Phillips ('Priscilla Queen of the Desert') with a production design by Gabriela Tylesova which gave the show a darker, more brooding approach. The show also incorporated revisions to the script and score that were installed in the London production. Ben Lewis stars as the Phantom with Anna O'Byrne as Christine Daae. 'Love Never Dies' is set ten years after the original story and follows Christine to New York's Coney Island where she is invited to perform for the mysterious Mr. Y. Characters from her past begin to emerge, including one with whom she shares a dark secret.

and Blu-ray and available on amazon.com.

Posted by The Hopeful Traveler at 11:46 PM 0 comments

With 'The Phantom of the Opera' on the verge of celebrating its 25th Anniversary since its London premiere, actor George Lee Andrews reached a milestone of his own with the Broadway production of Andrew Lloyd Webber's musical. Andrews has performed in various roles in the show (lately as Monsier Andre, one of the two opera manager characters in the show) for 9,382 performances. His last performance was on September 3rd.

A New York Times article about his achievement that is a Guinness World Record also revealed some interesting trivia:
- George Lee Andrews has been with the show for 23 years.
- During that time 12 different actors has played the title role.
- His contract has been renewed more than 40 times.
- Andrews is 68 years old by his last performance in the show.
- 'Phantom' has earned $825 million in New York so far.
- The Broadway production will celebrate its 25th anniversary in January 2013.
- More than 14.5 million people have seen the musical in New York.
- The show opened at the Majestic Theatre on January 26th 1988 with Andrews in the cast.
- Aaron Galligan-Stierle, 31, who is the son-in-law of Andrews will replace him in the role of Monsieur Andre.

The Times article indicate that lead producer Cameraon Mackintosh described the need for new blood to strengthen 'Phantom' for an indefinite commercial run as the reason that the contract with Andrews was not renewed.

Click HERE to read the full New York Times article. Below is an interview with Andrews on CBS News.

Posted by The Hopeful Traveler at 9:58 PM 0 comments

Review: 'The Phantom of the Opera' Haunts the Paliku Theatre at Windward Community College in Hawaii 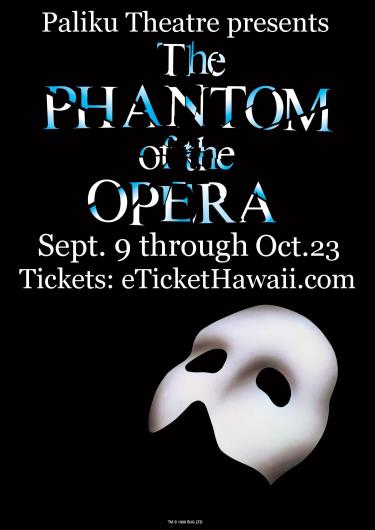 Andrew Lloyd Webber’s musical “The Phantom of the Opera” is available to high schools and colleges nationwide and taking advantage of the opportunity is Windward Community College, part of the University of Hawaii system, with a production at its campus Paliku Theatre.

Prior to this production, there were only three times the residents of Hawaii could see the music locally. In 1993 the Canadian tour of the show grossed over $11 million during a 10-week run at the Blaisdell Concert Hall. That record gross held for fourteen years until 1997 when the national tour of ‘The Lion King’ roared into Honolulu at the same venue. The same ‘Phantom’ tour returned to Hawaii a year later in 1994 for a shorter grossing run. It wasn’t until 2010 when anyone in Hawaii would see another production locally. The students of the private Punahou School put on a six-performance run in fall of that year.

Now talents on stage and behind the scenes are taking on the challenge of tackling one of the most extravagant musicals ever produced and interpreting it for a college theater stage. It appears the title is still as popular as ever evidenced by the sold-out run of the show at the Paliku.

Though one would expect a downsized version of the original set and costume designs by the late Maria Bjornson, such a production should apply more focus on the performers, their acting and singing. It’s a given that budget restrictions would limit any theatre company in trying to duplicate the original production design. Also despite what theatre critics might say, Lloyd Webber’s music and lyrics by Charles Hart and Richard Stilgoe ably transports the audience to the world of the late 19th century Paris opera house with a through-sung device and melodies to match. The operatic aspirations of the composter are made accessible with sweeping tunes.

For those familiar with the original: the crashing chandelier, the grand staircase for the masquerade ball and the phantom’s underground lair are all splendidly designed and lit by Lloyd S. Riford III for the Paliku stage. The only distraction was the blue elephant for the ‘Hannibal’ opera sequence in the musical’s first scenes. Equally brilliant is the costuming designs of Evette Tanouye Allerdings in what appears to include a mix of rented costumes.

Aside from the visuals, the orchestra and musical director Clarke Bright provide justice to Lloyd Webber’s score. The melodies are still grand and haunting as played by the seventeen-member orchestra. 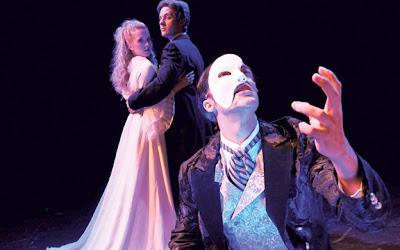 The role of the Phantom is in actuality a supporting one. But he is omnipresent throughout the evening even when the actor is not on stage. The true showcase role is that of Christine Daae, the ingénue that the Phantom bewitches. The score is a marathon for any performer especially for the actress portraying Christine (hence in almost every professional production with eight shows a week an alternate plays the role at certain performances).

Miles Wesley as the Phantom and Lydian Pusateri as Christine ably handle the plot demands. Both sing assuredly that “Music of the Night” and “Wishing You Were Somehow Here Again” will not disappoint and their duet of the title song is thrilling. Lloyd Webber has composed beautiful music linking these songs even if a chunk of them are to variations of the show’s big numbers. These moments deserve attention to carry the dramatic weight of the story. It’s likely that Wesely and Pusateri will grow into these characters over the remaining performances to deliver these sung lines with importance as they do the main numbers.

The role of the Raoul, the Vicomte de Chagny, completes the love triangle. As written the character does not offer much depth. But Kyle Mallis reveals a professional stage presence in his performance and elevates the character more than it deserves. He is strong in voice and plays the character believably. The cast also includes Leonard J. Villanueva and Douglas S. Scheer as the opera managers who provide more than adequate comedic support. As Carlotta, Jaime Craycroft plays the opera diva with great fun and relish intentionally reducing her soprano to pale in comparison to Christine.

The timeless appeal of this beauty and the beast story especially when adorned with the score of Lloyd Webber has helped to make the musical the most successful entertainment endeavor ever. Director Ronald E. Bright brings a confident hand to realize this production at the Paliku that will delight new and old fans of 'The Phantom of the Opera.' 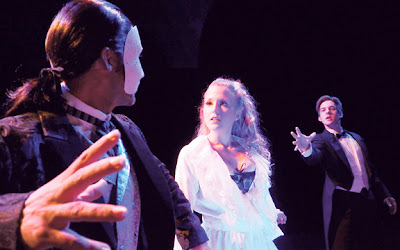 Posted by The Hopeful Traveler at 5:14 AM 0 comments