No matter how often I've had to book an airfare, finding that elusive bargain is still a challenge. Often the constraints on when and how long I can travel as well as my choice of airline are the ultimate road blocks in finding that great airfare price. But with that in mind, it's still worthwhile to know these insider tips from Joe Brancantelli (of travelwebsite JoeSentMe.com) in a report from U.S. News and World Report.

Brancantelli states a common truism: For the airline's it's about getting you to pay the most you're willing to pay, which is the opposite of what the consumer wants. On a single flight, there can be more than a dozen price categories. On a 150-seat plane, there could be 150 prices. Here are his eight insider tips:

Book six weeks in advance: Passenger pay the lowest price, nearly 6 percent below the average fare, if they buy six weeks before their flight.

Best time to buy is Tuesdays at 3pm Eastern:
The recommendation is only for domestic tickets. However one critic argues that the deal can vary frequently and there's no specific day or time of the week to buy.

Cheapest day to fly is Wednesday:
The day with the more empty seats required for discounting. Other low-cost days are Tuesdays and Saturdays. The most expensive are Friday and Sunday.

Fly out early:
The cheapest is typically the first flight of the morning. The next-cheapest are during or after lunch or at the dinner hour. The absolute cheapest is on limited routes with red-eyes.

Check low-cost airlines individually:
Comparison sites like kayak.com don't necessarily do all the work for you. Some airlines in the U.S. and in Europe don't allow their tickets to be quoted on such popular comparison websites.  Also check what fees are added to drive-up the cost.

Sign-up for free alerts on AirfareWatchdog.com:
Almost every airline offers this surface even if the fare drops only $2. But AirfareWatchdog uses people to vet deals rather than computer systems. The website only issues updates when they think they've found a good deal.

Build a relationship:
If you have an elite membership or credit card with the airline, you have a leg-up on other travelers. The more an airline knows you, the more it tailors its pricing for you. Credit cards tied to airlines offers perks such as free checked bags, priority boarding and seat selection.

Posted by The Hopeful Traveler at 5:47 PM 0 comments 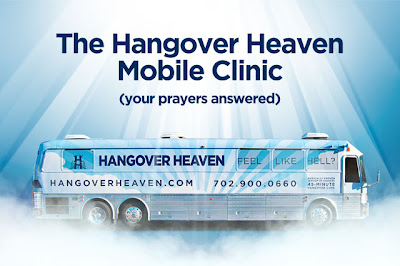 Anesthesiologist Jason Burke launched a service on April 14th that seems to fit like a glove for its location. The Hangover Heaven bus roams the Las Vegas strip for those in need of a cure for a night of imbibing.

This appears to be a first class service using a 45-foot bus as the moving clinic. It can accomodate 10-14 people at one time and includes a front and rear lounge, kitchenette, consulting room and four private bunks. The two lounges have flat-screen TV with stereo sound system.

Several therapies are offered to those in need. Hangover packages include:

The Redemption package is our basic service and is very effective at reducing the symptoms of a hangover and can be performed on just about anybody. It includes intravenous hydration which can help flush the toxins from your system. Many people say they feel more energized and “crisp” after this treatment. It is also useful to improve skin appearance in this dry desert climate.

This is our most effective service. It includes intravenous hydration, anti-nausea and anti-inflammatory medications. These medications act to directly resolve the effects of a hangover. This package also includes vitamin supplementation. These vitamins help to clear your body of the toxins resulting from a heavy night of drinking and can improve your generalized state of health. They also make you feel better quickly since they are very rapidly absorbed and can remain in your system for days after the therapy.

In room treatments are available from 8am to 4pm seven days a week, staff and schedule permitting.
If in-room service is not available due to scheduling, we have a VIP suite on the bus where treatment can be administered.
The in-room treatment consists of an actual doctor coming to your room and administering two bags of IV fluids, IV anti-nausea medicine, IV anti-inflammatory medicine, and IV vitamins. It is our premium service and will have you feeling better before you know it. The complete treatment takes approximately 45 minutes.

Other services offered include Myers Cocktail ($99), a nutrient drink administered with IV fluids, and B12 Shots ($20). Cures take about 45 minutes.

How about the safety? In a CBS News report:


"For the most part, it sounds safe," said Dr. Daliah Wachs, a family practice physician and national satellite radio medical talk show host based in Las Vegas. "But this is kind of gutsy. He's taking a risk."
A patient could have an allergic reaction, Wachs said, or fail to fully report their medical history. For people with pre-existing conditions, Toradol can affect the kidneys, she said, and Zofran can trigger abnormal heart rhythm. Still, Wachs said, emergency room physicians and clinic doctors have for decades provided hangover sufferers with IV drip "banana bags" - so named for their yellow color.
"I think many doctors are kicking themselves because they didn't think of this first," she added.

Posted by The Hopeful Traveler at 5:41 PM 0 comments

Another report from Travel & Leisure reveals the best and worst airports in America. The magazine's readers rated the airports based on flight delays; design; amenities; food and drink; check-in and security; service; and transportation and location.

Worst Airports in the USA:
1. New York (LGA)
2. Los Angeles (LAX)
3. Philadelphia (PHL)
4. New York (JFK)
5. Newark (EWR)
6. Chicago O'Hare (ORD)
7. Washington Dulles (IAD)
8. Boston (BOS)
9. Houston (IAH)
10. Atlanta (ATL)
11. Dallas Fort Worth (DFW)
The magazine reports regarding number one worst ranked La Guardia (LGA): "Dilapidated La Guardia hasn't aged well. The airport has the dubious honor of ranking the worst for the check-in and security process, the worst for baggage handling, the worst when it comes to providing Wi-Fi, the worst at staff communication, and the worst design and cleanliness. If there was a ray of hope, its location, was considered superior to six other airports."

Best Airports in the USA:
1. Minneapolis (MSP)
2. Charlotte (CLT)
3. Detroit Metropolitan (DTW)
4. Orlando (MCO)
5. San Francisco (SFO)
6. Baltimore (BWI)
7. Las Vegas (LAS)
8. Seattle (SEA)
9. Denver (DEN)
10. Miami International (MIA)
11. Phoenix (PHX)
The magazine reports regarding number one ranked best ranked Minneapolis-St. Paul International (MSP): "This may be the cheeriest and most welcoming airport in the nation. T+L voters loved the shopping and food and drink options at this mini-mall of an airport, and when it came to ease of check-in and security, Minneapolis also took the No. 1 spot. It came in second for design and cleanliness, baggage handling, staff communication, and airport location. Only its Wi-Fi offerings were lackluster (11th place), but that still left this midwestern oasis as the clear winner."

Click HERE to view the full article and analysis of each ranking on the Travel & Leisure website.
Posted by The Hopeful Traveler at 6:43 PM 0 comments