In April the U.S. Department of Transportation issued new airline passenger protections that will help passengers from the booking online to the airport experience. Here are the highlights. All changes are effective August 23, 2011.

Lost Bags and Bag Fees:  Airlines will now be required to refund any fees for carrying a bag if the bag is lost. This rule only affects lost bags and not applicable to delayed bags.

Full Disclosure of Additional Fees: Airlines will also have to prominently disclose all potential fees on their websites, including but not limited to fees for baggage, meals, canceling or changing reservations. Expect to see the full disclose of other fees such those in reference to children and pets. This rule only affects the websites and not necessarily requires the airline to clearly display the fee schedule at the airport.

Bumping: The new rule doubles the amount of money passengers are eligible to receive in the event they are involuntarily bumped. If passengers are bumped and the airline gets them to their destination within a short period of time (1 to 2 hours of their original arrival time on domestic flights; 1 to 4 hours on international flights), the compensation is equal to the double the price of their ticket up to $650 in lieu of $400. For lengthy delays (over 2 hours from the original arrival time on domestic; 4 hours international), the payment is four times the value of their ticket up to $1,300.

The unfortunate aspect is these payments do not begin to make up for the lost cost for hotels, tours, cruises or even lost time from work.

Tarmac Delays: Click here to see the post about domestic tarmac delays. The new rule expands the ban on lengthy delays to cover foreign airlines operating at U.S. airports and establishes a four hour time limit on tarmac delays for international flights of U.S. and foreign airlines. Carriers must also ensure that passengers stuck on the tarmac are provided adequate food and water after two hours, working lavatories and necessary medical treatment.

The delays experienced by passengers on foreign carriers stuck at New York's JFK Airport during the December 2010 blizzard was an important factor for this provision.

Other Changes: Among them includes notifying passengers of delays overs 30 minutes, cancellations and diversions. This must take place in the boarding gate area, on the carrier's telephone reservation system and on its website.

The experience of flying is still far from the storied past glory days of jet age but these rules should help qualm some of the potential problems for passengers. Read the complete press release at dot.gov.
Posted by The Hopeful Traveler at 7:55 AM 0 comments 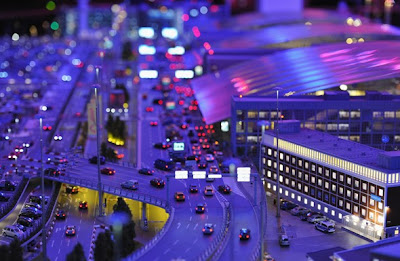 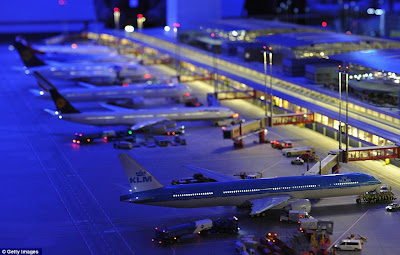 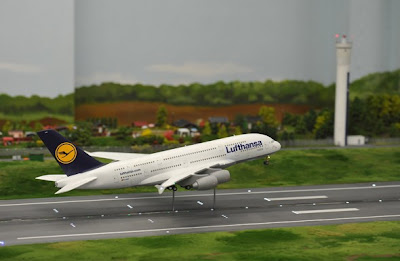 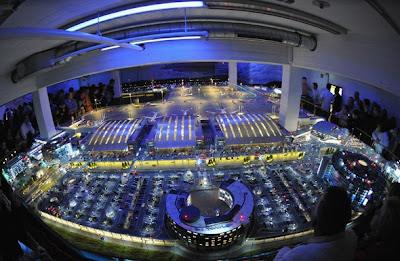 The world's largest model airport opened this week in Hamburg, Germany in what one press report calls "a spectacular display with a stunning attention to detail." At 494 square feet, the model (loosely based on Hamburg's airport) took more than six years to build. Called Knuffingen Airport, no expense was spared at a cost of nearly $5 million. 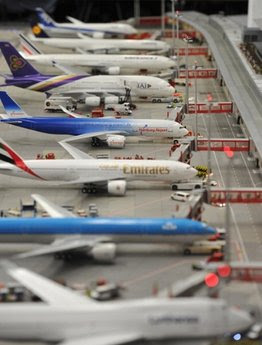 The airport is part of the full display at Germany's Miniatur Wunderland which includes the world's largest model railroad landscape exhibition. The models already opened prior to the addition of the airport already boasted 200,000 inhabitants and over six miles of train tracks. Knuffingen is the name of the fictitious city at the German attraction.

With a computer at the control, the planes take-off, land and park themselves, passenger walkways move, people appear to walk around the terminals and vehicles automatically move around the airport. The airport is so up to date that it features model A380s used by Emirates and Lufthansa. From videos uploaded online the lighted airport appears spectacular when viewed in a night scene (see the youtube video above).

I am absolutely fascinated in observing the minute details of the model via the videos and photos of the attractions. And by that admission, I am a total geek. Visit miniatur-wunderland.com for more information or visit the city of Knuffingen's official website at knuffingen.de. Additional photos follow the video below.

Read more »
Posted by The Hopeful Traveler at 7:38 PM 0 comments

In a reworked version, Andrew Lloyd Webber's 'Love Never Dies' opens at the Regent Theatre in Melbourne, Australia on May 28, 2011 (previews from May 21st). With an entirely new design team and director, audiences should expect a vastly different show from the version that opened in London in 2010. Visit loveneverdies.com.au for more information.  'Love Never Dies' is Webber's sequel to his 'The Phantom of the Opera.' After a mixed reception in London, critics will be awaiting to see if the show has been improved.

I was hoping to make the journey to Melbourne this year to compare this production with the version playing in London's West End. But with a limited run announced for now and sky high airfares it appears this visit will have to wait for now.

The videos below reveal the production moving into the Regent Theatre and the two leads, Ben Lewis (The Phantom) and Anna O'Byrne (Christine Daae), performing the show's signature tunes: "Till I Hear You Sing" and "Love Never Dies".


Posted by The Hopeful Traveler at 6:27 PM 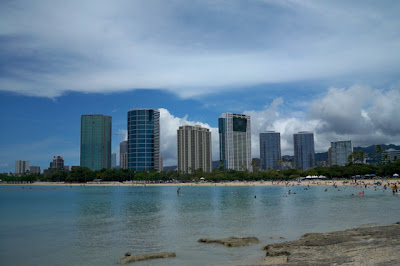 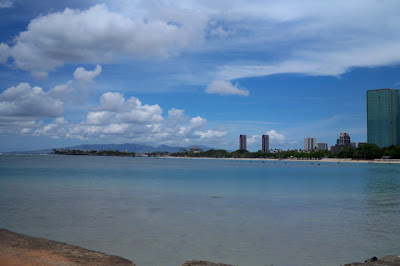 Adjoining Ala Moana Regional Park on the east end is Magic Island, a 30-acre peninsula created in the 1960s by a landfill project. Despite being renamed in 1972 to Aina Moana Park, the area is still called Magic Island by residents. The park contains over 400 parking stalls at its north end with lots of open space, sites for picnics and a beachside lagoon at the south end of the peninsula. The beach of Ala Moana Park continues along the north west side of the Magic Island. The west and east sides of the park offers panoramic views. The east side offers views of the Ala Wai Channel and Yacht Habor, the hotels of Waikiki and Diamond Head. The west side gives a view of Ala Moana Beach and the towering condos above it.


Read the previous post about Ala Moana Regional Park. By the way Ala Moana in Hawaiian means path to the sea. The park is located between downtown Honolulu and Waikiki and open from 4am-10pm daily. 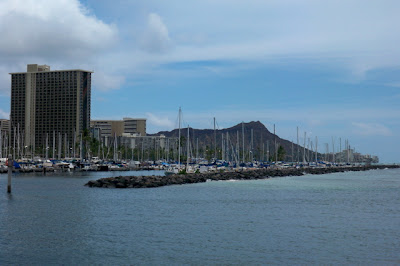 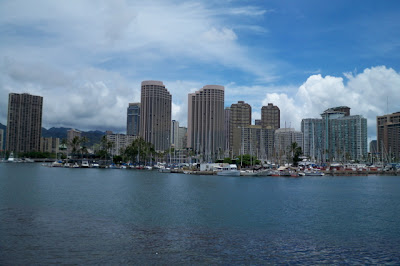 Posted by The Hopeful Traveler at 7:34 PM 0 comments 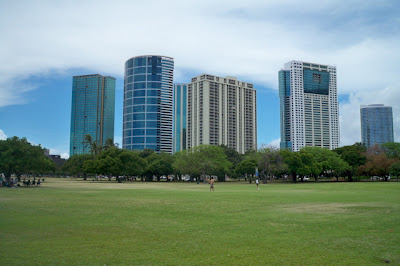 Working at the Department of Parks & Recreation of the City & County of Honolulu during my post college days for two years, I learned one of the jewels in the park system is Ala Moana Regional Park or more simply known as Ala Moana Beach. Because of its visibility and popularity it's a showcase for any visitor on their way to a Waikiki hotel hence the care and budget designated to the park. This weekend I had the opportunity to revisit the park. 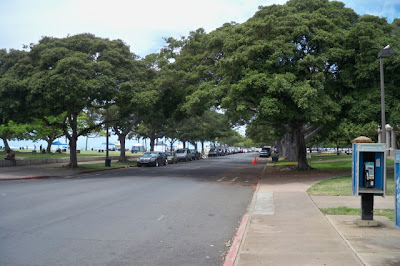 At over 70 acres the park's centerpiece is the wide golden sand beach that stretches over a half-mile. The calm waters, one of the benefits of having an outer reef as protection, makes it popular for families. The north side of the park contains both open grassy areas and shaded spots offered from banyan and palm trees. The park is popular for picnic events and permits are required to stake out one of the official picnic sites for parties ranging in size from 25 to 250 people. 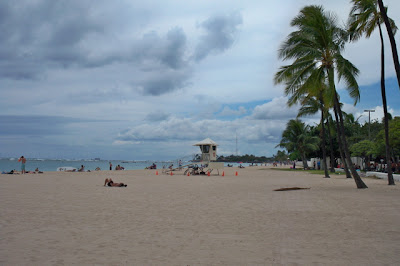 Vehicle access is through one of two entrances that leads visitors to Ala Moana Park Drive which stretches the entire length of the park. All vehicle parking is along this roadway. Because of the popularity of the beach and park on weekends parking often is scarce. Though not recommended some park at the Ala Moana Center or Ward Centre located across the street along Ala Moana Boulevard.

In the center is McCoy pavilion which the city uses and rents for special events. The park also includes tennis courts, concession stands and lots of picnic tables. The two lagoons at each end of the park and canal that connects them actually serves to keep the former swamp lands dry by allowing water to drain into this waterway. 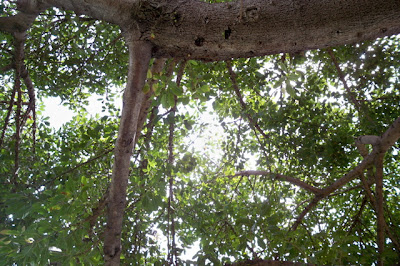 Read the next post for part 2 with a description and views from Magic Island which adjoins Ala Moana Regional Park. By the way Ala Moana in Hawaiian means path to the sea. The park is located between downtown Honolulu and Waikiki and open from 4am-10pm daily.