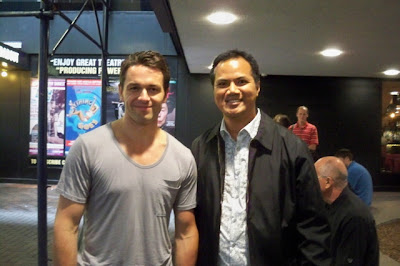 With a little more than two hours between the end of a Sunday matinee and then attending an evening performance, I was eager to get a quick bite to eat and head back to the hotel. Unfortunately the light rain of the morning became a downpour in the afternoon. Even armed with an umbrella and jacket, the best thing to do was wait out the rain after the end of the matinee in the breezeway that connects 46th and 47th street just outside of the theatre's entrance.

Because the Laura Pels Theatre occupies an underground space, there is no traditional stage door. Instead the performers enter and exit through the same doors as the audience. The rain and the delay proved to be of some luck as I noticed Julian Ovenden, star of of the musical 'Death Takes A Holiday' chatting with some audience members. So opportunity knocks and after his conversation ended I kindly asked for his autograph and photo (above are both photos). After seeing his performance this afternoon, he has the presence and voice to carry a stage musical. Hopefully more will see the show to hear his lustrous singing voice. Read the previous post for a review of the production.

I first saw Ovenden in November 2006 in the revival of the play 'Butley' starring Nathan Lane at the Booth Theatre. The role was Ovenden's Broadway debut for which he received a positive reviews including one in the New York Times. His London musical credits include 'Merrily We Roll Along', 'Grand Hotel', 'Annie Get Your Gun' and a starring role in the ill-fated Michel Legrand/Claude Michel Schonberg/Alain Boublil musical 'Marguerite'. He has also appeared on television in "Foyle's War" and "The Forsythe Saga". American audiences may be familiar with his featured role in the short-lived television series "Cashmere Mafia".

Click HERE to read more about Julian Ovenden in a New York Times article that accompanies the photo below. He has a website which appears to be a work in progress at julianovenden.com.

Posted by The Hopeful Traveler at 5:21 PM