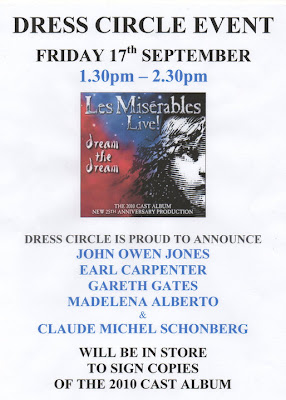 Sometimes things happen by luck. If I was not exploring the internet the day before my flight to London to check if the shop Dress Circle was open on a Sunday, I would have likely missed this store event which was occurring on the Friday prior.

So in a way it was by luck that I found myself at Dress Circle on this Friday afternoon. Four of the actors appearing in the 25th Anniversary Tour of 'Les Miserables' made a store appearance at Dress Circle to autograph the Les Miserables 2010 Cast 2CD set. It was a special event to attend after witnessing their performances the day before and finding it a revitalized musical with an excellent ensemble.
Appearing at the signing were John Owen-Jones (Jean Valjean), Earl Carpenter (Javert), Madalena Alberto (Fantine) and Gareth Gates (Marius). Also appearing was Claude Michel-Schonberg, the composer of 'Les Mis'. Standing in line it was obvious not only fans of the show were there but the many fans of Gates. He is a runner-up on the first season of the reality competition show Pop Idol on which American Idol on U.S. television is based upon. In addition he has sold over 3.5 million records in the UK alone and starred in the last West End revival of 'Joseph & the Amazing Technicolor Dreamcoat'.

A simple diversion for the afternoon and what a souvenir to gain.

On DVD is Les Miserables: The 10th Anniversary Dream Cast in Concert at London's Royal Albert Hall.
Posted by The Hopeful Traveler at 2:45 PM