A Gift from the 'Wicked' Preview Event

It's the holidays and though I'm in the midst of picking up the last of the holiday gifts on my list, it was nice to receive something before Xmas. At the sneak peek presentation this past Wednesday for the Honolulu premiere of the musical 'Wicked', gift bags were offered to the guests who held the original invitations to the event. The bags contained one large t-shirt which had the "Defying Gravity" printed on the back, a pin and sticker. Also included was a gatefold flyer featured images from the show.

Those wanting to purchase official 'Wicked' show merchandise can purchase them at booths at the show or the online Ozdust Boutique or Playbill.com. Surely one of the original souvenirs available has to be the projector pen.

Posted by The Hopeful Traveler at 10:43 PM 1 comments

Broadway in Hawaii: 'Wicked' Preview Event at the Blaisdell 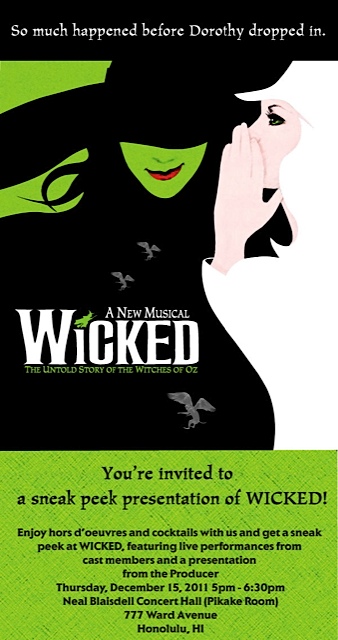 Today officially launched group ticket sales for the Hawaii premiere of the hit musical 'Wicked'. A not so exclusive event of several hundred people at the Blaisdell Center in Honolulu offered guests a chance to partake in a party atmosphere filled with lots of food and generous amounts of alcohol in a display accented by 'Wicked' and Emerald Oz accents. There was even a huge gleaming bowl of green-colored gelatin among the spread of food.

But the real event was the preview which featured 'Wicked' producer David Stone, Michael Braxton of MagicSpace Entertainment (presenter for the Honolulu show dates) and Honolulu City and County Mayor Peter Carlisle. A taped presentation featured the show's composer Stephen Schwartz. Another video presentation of highlights of the production was enthusiastically received by the audience which was topped by a live performance from two actresses playing the roles of Elphaba (the Wicked Witch) and Glinda (the Good Witch) in the National Tour singing two songs from the show.

By my observations many who attended were expecting to be treated to more than just a couple of numbers from the musical. Though many left immediately after the presentation, a long line of people remained to submit their orders forms and snag priority seats to the Honolulu performance dates of 'Wicked'. The final tally on my order form was 30 tickets for family and friends. We were told that orders placed today would be fulfilled first before the official group sales begins next week.

The last time I saw 'Wicked' was four years ago in London and before that in 2004 in New York City. The event did its job on me as I actually now can't wait to see the show again in Honolulu almost a year from now. I have to admit the excitement began two weeks ago when I got the invitation to this preview event. Of course part of the joy is seeing the show and sharing the experience among a local crowd without the cost of airfare and hotel.

It's been a while since the announcement of a Broadway musical playing Honolulu was launched with such fanfare. 'Mamma Mia' underwhelmed when it played the Blaisdell Concert Hall in 2009. It's likely 'Wicked' will be met by the same enthusiasm that greeted 'The Lion King' when it played Honolulu in 2007 and broke the local box-office record for a musical that held steady since 1993 by 'The Phantom of the Opera'.

It appears that 'Wicked' is also charging the most for premium price seating at $150. 'The Lion King' did offer premium seats at a similar price but it was part of a package that included a show souvenir merchandise so in the way if one were to proportion the cost of each item, the premium seats at 'Lion' were less expensive. Also unlike 'Wicked' a whole patch of prime orchestra seats was not devoted to premium ticket sales. Premium seats for 'Wicked' only includes the reserved prime seating. It should be noted that group ticket sales are 10% off full-ticket prices and service fees are less substantial than the charges of Ticketmaster.com.

Group ticket sales opens to the general public on December 19th by calling (808) 593-2468. Visit the Broadway In Hawaii website for order forms and more information. Single ticket sales date to be announced (anticipated for late spring).

Posted by The Hopeful Traveler at 11:47 PM 1 comments

It's been two weeks since the announcement that American Airlines parent company AMR Corp. filed for Chapter 11 bankruptcy protection in New York. As readers of this blog know American Airlines is my airline of choice where I currently hold a platinum elite level status in their Aadvantage program.

However at this point I can only be reassured that the airline will conduct business as usual as it attempts a reorganization process to unload debt built by years of accelerating jet file prices and labor struggles. As any flier who has built a loyalty in one frequent-flier program, it would be difficult to start from the ground up again. In addition as a matter of habit frequent fliers know what to expect of the airline in terms of service and cabin comfort.

American Airlines and American Eagle has contacted customers mainly via email that they would:
The airlines will also continue to provide employee wages and benefits. It should be noted that American is last of the legacy airlines to seek protection from creditors. News reports indicate the airline reports that is spent more than any other airline to abide by labor-contract rules as it avoided bankruptcy. United and Delta were to able to scrap their existing labor contracts after filing for Chapter 11.

Even with the bankruptcy announcement being fairly recent that some news outlets are already speculating that one of the major carriers is planning to buy American. That kind of guess work is far too premature.

Coincidentally the filing is the 100th by an airline since 1990, according to the Air Transport Association. Some airlines including Hawaiian Airlines and US Airways, have filed for bankruptcy more than once so it it is amazing that American held out this long. One of the most high-profile filings was the Chapter 7 liquidation of Eastern Airlines in 1991. The ATA does not note that some of the 100 bankruptcy filings comes from smaller unknown carriers such as Mahalo Airlines in 1997, which attempted to complete with Hawaiian Airlines and Aloha Airlines in Hawaii's inter-island carrier market. The list also includes cargo carriers.
Posted by The Hopeful Traveler at 6:42 PM 0 comments

Consumer Reports featured some quick and simple tips to avoid some common mistakes when using a digital camera. However unlike when we used camera film, today we shoot many shots and choose the best ones when we return home. But as we all know this becomes a chore after a while. Better heed these tips to save time while on vacation and when reviewing the photos back at home.

Not reading the user manual. This will deprive you of features that could greatly improve the shots you take. You should brush up on it at home or while traveling to your destination.

Not bringing a spare battery. Even if you charged the battery the same morning, reviewing shots on the camera can deplete it by late in the day. Exposure to cole can also reduce battery life. Charge a spare and keep it on hand.

Trying to squeeze too many photos on the storage card. You can do this by lowering the resolution or increasing compression, but both will reduce the quality of larger prints. Memory cards are cheap. It's better to bring extra along.

Using a flash when you shouldn't. Flash can cause red-eye, wash out skin tones, and flatten scenes. To avoid using flash, shoot with the sun or light source to your back or move the subject closer to a window or other sources of light. Never use flash on a subject more than a few feet away as you'll get a dim subject with a black background.

Using a very high ISO. If your camera has this option it's tempting to crank up the ISO to the highest setting. But this will degrade the quality of the photos you snap.

Click HERE to view the full article.
Posted by The Hopeful Traveler at 5:12 PM 0 comments