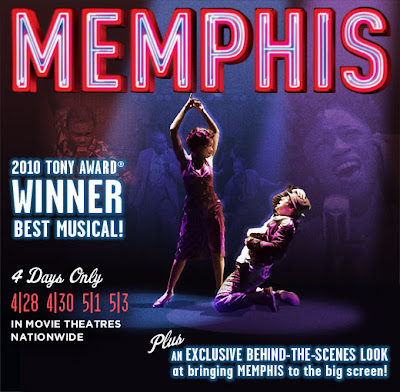 In a rare endeavor, a musical still running on Broadway, will be filmed and released to movie theaters across the country. 'Memphis', the 2010 Tony Award winner for best musical was filmed in January in high definition and scheduled to play cinemas for four performances beginning April 28, 2011.

This is the first musical to ever receive such a treatment. For movie audiences, the live performance will feature the original cast including the stars, Chad Kimball and Montego Glover, who were nominated for leading acting Tony Awards. The presentation will include behind-the-scenes footage. 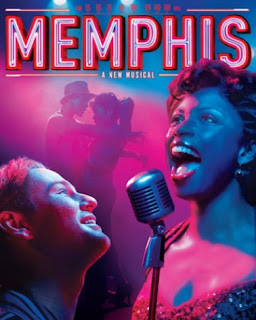 The timing is to draw attention to the upcoming national tour of the show and to the New York production at the Shubert Theatre now in its second year of performances.

The musical is about what happens when a 1950s Memphis DJ with white listeners decides to play African-American music. The DJ becomes involved in an interracial love affair in the segregated South. The story is inspired by the legendary DJ Dewey Phillips and the music that became known as "rock 'n' roll." The film won four Tony Awards for best musical, best book, best score and best orchestrations. Bon Jovi songwriter and band member David Bryan with Joe DiPietro composed the score of gospel, rhythm and blue, rock and soul. The show opened on Broadway October 19, 2009 and continues an open-ended run. For more info visit MemphistheMusical.com.

I was underwhelmed when I saw the production live on Broadway last June. By winning best musical, expectations should be high. This will give me the opportunity to revisit the show for a second look.

The filmed production is a presentation of Broadway Worldwide and NCM Fathom. Scheduled show times are April 28, 30 and May 3 at 7:30pm and May 1st at 12:30pm. Visit fathomevents.com for tickets and a movie theater near you. Tickets are priced at $20. Not a bad deal considering an orchestra ticket top out at $131.50 and premium seats priced at $251.50.

A review will be published by The Hopeful Traveler after the first movie presentation.

Posted by The Hopeful Traveler at 7:03 PM 0 comments

Reader's Digest asked several pilots across the country to give straight answers to maddening questions regarding flight safety rules. Here are some of them explained. I have to admit I didn't know the answer to all of them.

“We don’t make you stow your laptop because we’re worried about electronic interference. It’s about having a projectile on your lap. I don’t know about you, but I don’t want to get hit in the head by a MacBook going 200 miles per hour.”
“People don’t understand why they can’t use their cell phones. Well, what can happen is 12 people will decide to call someone just before landing, and I can get a false reading on my instruments saying that we are higher than we really are.”
“We’re not trying to ruin your fun by making you take off your headphones. We just want you to be able to hear us if there’s an emergency.”
“We ask you to put up the window shade so the flight attendants can see outside in an emergency, to assess if one side is better for an evacuation. It also lets light into the cabin if it goes dark and helps passengers get oriented if the plane flips or rolls over.”
Visit readersdigestversion.com for articles covering the gamut from food to health to travel.
Posted by The Hopeful Traveler at 6:32 PM 0 comments

The Renaissance London Chancery Court will no longer be managed by Marriott. Effective June 11, 2011. The hotel which Marriott managed since it opened in 2000 will be managed by Preferred Hotels & Resorts and be simply called the Chancery Court Hotel. My stay in September 2010 at this property was among the best ever among hotels I've patronized over the years. Click here for the first in a series of posts about my stay at the Chancery Court. I was hoping to save Marriott reward points for a return visit. But it appears now those points will be spent elsewhere. Marriott reports that the parting was mutual with the hotel owners.

A second Renaissance recently opened in England's capital. The St. Pancras Renaissance London Hotel is a little farther away from the West End than the Chancery Court. But no matter. The King Cross St Pancras station has access to six underground lines and the Eurostar trains. The hotel's striking Gothic architecture has been restored to become one of the landmark masterpieces in central London. The St. Pancras, like the Chancery Court, is listed under the Marriott Rewards level of "7" which makes the five-star property one category shy of Marriott's top tier locations.

Posted by The Hopeful Traveler at 11:06 PM 0 comments