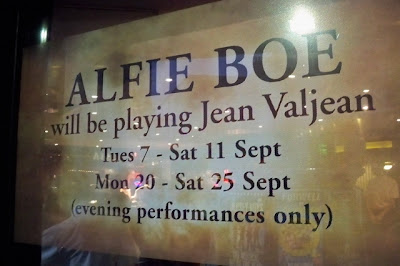 This is the last stage door event among the marathon number of London plays. This time it's to meet Alfie Boe playing the lead role of Jean Valjean for one week in preparation for the 25th Anniversary 'Les Miserables' Concert at The O2 arena next month. 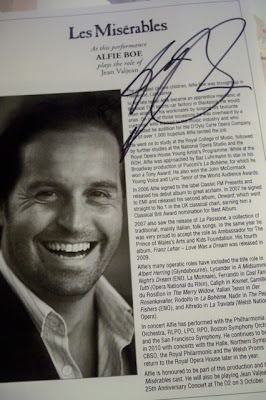 Being a fan of the Baz Luhrman's directed version of 'La Boheme', I was fortunate to meet Boe in 2004 at the Ahmanson Theatre in Los Angeles where he was playing the lead role of Rodolfo in that production. It was there he generously offered a tour of the 'Boheme' set. It was amazing that he remembered me as the fan from Hawaii. He is one of the nicest performers I have met in the times I've waited at the stage door during my years of traveling to see the best of theater.

As reported in the prior post, I had no idea he would be performing during my visit though I was aware of The O2 concert which would take place after I left London. It was by luck that I visited Chinatown on Sunday night and saw the sign (above) near the Queen's Theatre doors. I picked up my ticket on Monday morning and I had a play for Tuesday night where there was none. 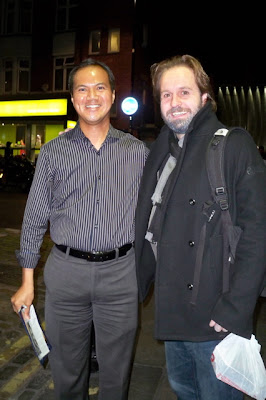 It was also fortunate that I often travel with Hawaiian candies. I had two boxes left and offered them to Boe after the show.

Since 2004, Boe has become one the leading tenors in England having performed in all of London's major venues and on tour. In the interim he has recorded four solo albums which are available only in the UK.

Visit his official website at alfie-boe.com. His recordings are available online at amazon's UK online store (amazon.co.uk). In the USA, you can see him perform in the English National Opera version of 'La Boheme' on DVD

. The CD of 'La Boheme' featuring Boe is no longer in print but is available on iTunes. Also available domestically is a CD featuring Boe on a requiem recording composed by Howard Goodall called Eternal Light

Since Boe was peforming the role of Valjean for a strict limited number of performances, a special insert (scanned below) was included in the souvenir brochure sold in the theatre.

Summer 2011 Update: Since Boe's appearance in the 'Les Mis' concert, a selection of his UK recordings are available on amazon.com for U.S. fans:
'Alfie'

'Bring Him Home' by the Valjean Quartet

'Love Was A Dream' 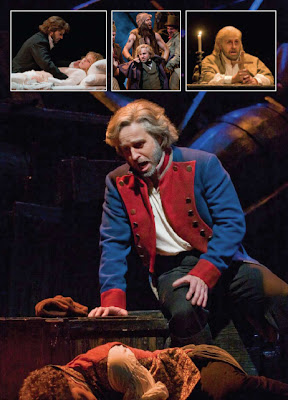 Posted by The Hopeful Traveler at 11:00 PM