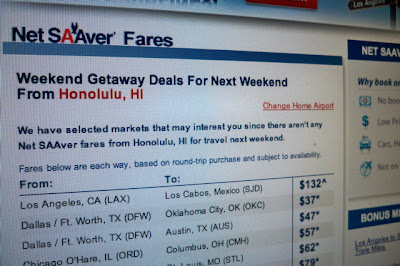 Every week it says the same thing. I receive from American Airlines their weekly Net SAAver Fares email which lists deals for the next weekend. Every week the email is customized to report:

"Weekend Getaway Deals For Next Weekend From Honolulu, HI"

Then it offers the disappointing statement:

"We have selected markets that may interest you since there aren't any Net SAAver fares from Honolulu, HI for travel next weekend."

It's like receiving a box of candy and finding there's nothing inside. Then fares from airports such as Los Angeles, Dallas-Fort Worth and Chicago O'Hare are listed. So how does American expect passengers from Hawaii to get to those airports? I know, why leave Hawaii to go on vacation.

Click here to find deals for next weekend from your city, if there are any.
Posted by The Hopeful Traveler at 8:58 PM 0 comments

It was going to happen one day. Emirates has installed showers on their A380 luxury aircrafts. Alas the two showers are for the 14 passengers seated in their first class which is located on the plane's upper deck. The airline provides shower kits and passengers must contact the flight's purser to make an appointment. The catch: given the enormous weight of water, fliers are limited to a five-minute shower. A color coded warning system alerts the passenger that the water is about to run out.

The Emirates A380 flies nonstop from Dubai to New York. Visit emirates.com for more information about their on-board shower spa. Read a review published in the Western Australia's online news site, WAtoday.com.au. Below are more pics of their first class cabin and the double-decker A380 aircraft. The last photo is the Emirates business class seat for comparison. 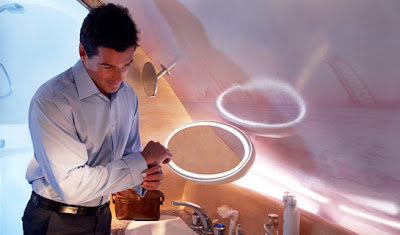 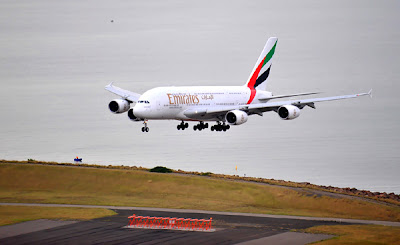 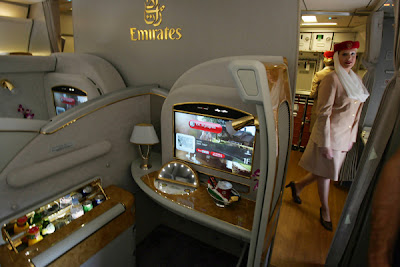 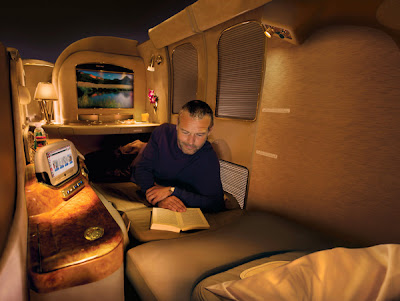 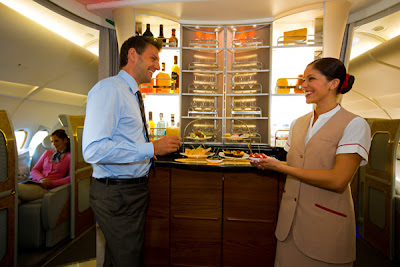 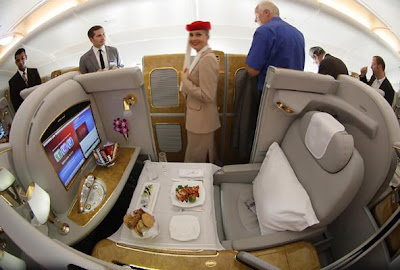 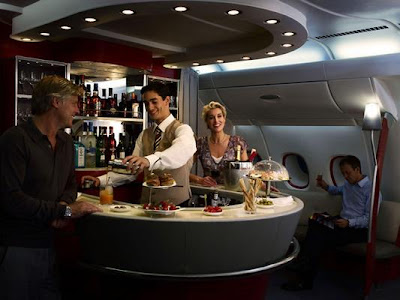 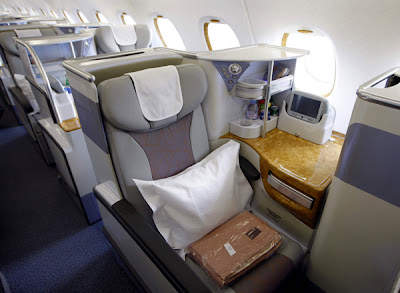 Posted by The Hopeful Traveler at 7:28 PM

Closing!!! 'Women on the Verge of a Nervous Breakdown' in NYC


Another musical based on a movie closes. The pedigree of the new musical 'Women on the Verge of a Nervous Breakdown

' had hit written all over it. No doubt Lincoln Center thought so and was probably seeking a long run to fill the coffers of the not-for-profit organization. Lincoln Center produces a musical now and then and among them were the hit revivals of 'South Pacific

' (2007). All three extended well beyond the announced limited engagements.

Then there are the creators: composer David Yazbek ('The Full Monty

') and a design team attached to a string of major musicals.

Finally the source material is one of Spanish director and writer Pedro Aldomovar's first films to gain popularity in America and an Oscar nomination for foreign language film. The breakout star of the 1988 film

was a young Antonio Banderas.

It didn't hurt the film had a screwball story. Described by amazon.com

: A woman's lover leaves her, and she tries to contact him to find out why he's left. She confronts his wife and son, who are as clueless as she. Meanwhile her girlfriend is afraid the police are looking for her because of her boyfriend's criminal activities. They talk to a female lawyer, who turns out to be the lover's new lover, and everyone's path keeps crossing each other's in a very complicated and confusing manner.

Where most recent musicals based on a movie had a source that was widely popular, New York Times reported before the show's opening:
The $5 million show is a rarity: a new musical based on a foreign film from two decades ago that is probably not widely known among the tourists who are the backbone of Broadway box offices. And the show is opening in New York without the traditional out-of-town tryout used by every other new musical now on Broadway ('Spider-Man Turn Off the Dark' was yet to play its first preview) to test material to make corrections.
The review from Variety:
The recipe for gazpacho is scrawled large across the curtain. Like the dish in question, the new Almodovarsical is refreshing, peppery and palate-cleansing, but it is still, in the end, cold tomato soup -- invigorating and highly spiced, but not satisfying enough for a full meal or a full evening's entertainment. Tuner is blessed with some delicious performances and any number of items of interest, but the result can be summed up as a women (and men) on the verge of a coherent musical.
Part of the problem is all those characters, played by all those musical-comedy luminaries, unable to step back into a supportive ensemble when necessary. (The design team) produce a visually fascinating show. But Lane and the talented Yazbeck, in an attempt to stay true to the film and provide songs and scenes for each of their nine featured principals, have spread their story so thin that audience interest soon deflates.

'Women..' opened at the Belasco Theatre on November 4, 2010 (previews from October 8, 2010 after being delayed twice) and closed on January 2, 2011, three weeks earlier than the scheduled January 23 closing date, for a run of 30 previews and 69 performances. A cast recording

of the musical is scheduled for release on May 10. More production photos below the video.

Read more »
Posted by The Hopeful Traveler at 4:54 PM 0 comments 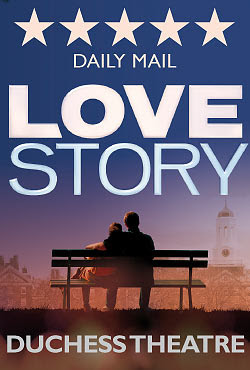 This is the second post about movies adapted into recent stage musicals and then failing to match its source material's success. This time its 'Love Story the Musical' or is it 'Love Story on Stage'. The press materials indicate the show is based on the novel by Erich Segal on which the film was based. But do you think this musical would exist if the movie was never made?

The following reviews were from the show out-of-town run before arriving in London. From Michael Billington's review in The Guardian:
"Wipe away your tears with Love Story tissues," urges a sign behind the marketing counter. But I wouldn't anticipate a great sales boom. This 110-minute chamber musical, with a score by Howard Goodall and book and lyrics by Stephen Clark, based on the Erich Segal story

is so decorously tasteful that by the end, there wasn't a damp eye in the house.

, knows the story. Jenny, a poor Italian girl, meets Oliver, a rich boy, at Harvard, marries him and then dies. It could be moving if it weren't for the air of cold calculation, emanating from Segal's original, that surrounds the enterprise: it seeks a deep emotional response to people we hardly know. Starting with Jenny's death, Clark's lyrics ask, "What can you say about a girl who made you proud to be her friend?" Since Jenny doesn't appear to have any friends, the question seems redundant. And Oliver is worse than a cipher: he seems a jerk. 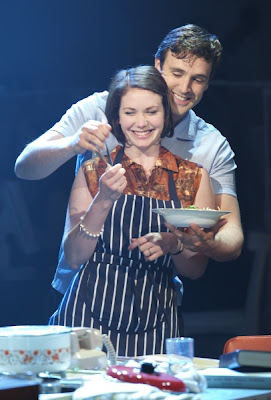 A review by Quentin Letts in the Daily Mail was more favorable:

Anyone in need of a really good blub should get down to Chichester, where Howard Goodall has set to music Erich Segal's 1969 American weepie Love Story. The screen version's theme tune makes a brief appearance, but composer Goodall makes the show his own: classical, popular airs, faultlessly sung by a small cast, performed by a piano and a string sextet.

Going without a break saves the spell being broken. And spell is what it feels like, with Emma Williams and Michael Xavier as two Boston students, Jenny and Oliver, whose young marriage is shattered by her leukaemia.

'Love Story' opened at the Duchess Theatre on December 6, 2010 (following previews from Nov. 27) and shutters February 26. Unlike 'Flashdance the Musical' which closed two weeks ago, 'Love Story' leaves behind a cast recording of the score which can be purchased from amazon.co.uk. 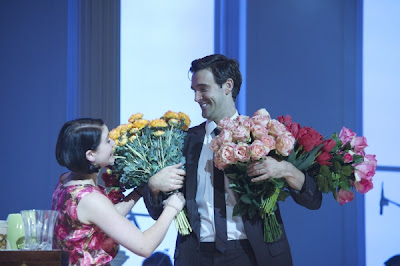 Read more »
Posted by The Hopeful Traveler at 8:48 PM 0 comments