From 'The Woman in White' and then 'Love Never Dies,' the use of video scenery in both of these Andrew Lloyd Webber musicals was prominent. Rather than just downsizing the set design, digital scenery is being used to complete the scenery and is often used to great effect that would be too expensive or impossible to do with traditional stage design techniques. In 'The Phantom of the Opera' at Royal Albert Hall in Celebration of 25 Years, the use of digital scenery helps to fill the stage at the huge venue but remain faithful to the original and much loved designs by Maria Bjornson.

For "The Woman in White" many criticized designer William Dudley's complete use of digital scenery on curved screens which was applied to dizzying effect and caused some dizziness among audience members. The use of digital scenery and projection designed by Jon Driscoll for the 'Phantom' sequel 'Love Never Dies' was used to enhance rather than dominate the production design by Bob Crowley.

Driscoll was handed the duties of again designing the projections and digital scenery for 'The Phantom' 25th anniversary celebration. An article on stage-directions.com reports that Driscoll had to work to within the sets of two designers, Bjornson and Matt Kinley. Kinley adapted the designs by Bjornson and augmented them for Royal Albert Hall. In addition costumes and accessories had to be found to dress the more than 130 member cast and ensemble. So it would have been improper to bill the show as 'The Phantom of the Opera' 25th Anniversary Concert.

The digital scenery was split into two sections. Above the raised orchestra platform was a huge gauze screen onto which the projections were employed. Below the platform were nine panels filled with with 75 LED screens. The five inter panels moved into a series of different positions for cast and scenery to be moved on and off stage. These two video elements were united to depict the elegant swooshing of the curtains across both surfaces.

In this post are set design renderings revealing the use of the projection and video screens. Click HERE to read more about Driscoll's work on 'The Phantom' celebration.

Posted by The Hopeful Traveler at 8:46 PM 0 comments 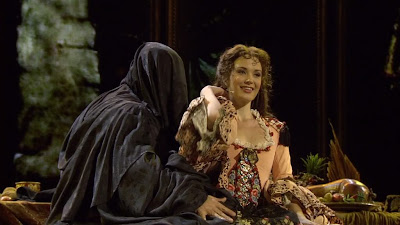 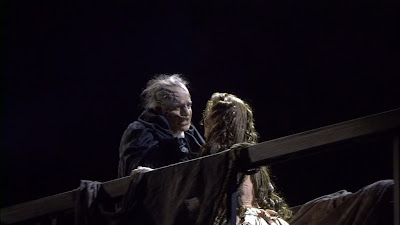 Posted by The Hopeful Traveler at 7:48 PM 0 comments 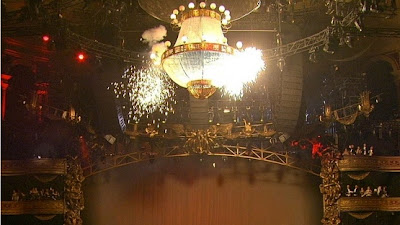 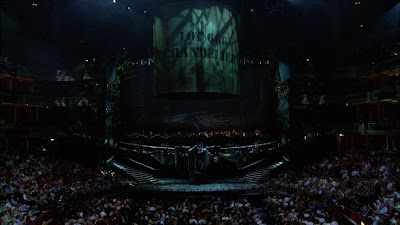 It was inevitable that I would attend the last screening of the cinema presentation of 'The Phantom of the Opera' at Royal Albert Hall in Celebration of 25 Years after having already seen it the week before. After viewing other productions filmed plays and musicals which were then shown on television or released on DVD, seeing these presentations in a movie theatre gives the show more justice than seeing it on the small screen. If you cannot see it live in the theatre then this is the next best thing.

Note that the show is not billed as 'The Phantom of the Opera' 25th Anniversary Concert unlike the anniversary event for 'Les Miserables' last year. It a fully staged presentation complete with sets and costumes.

Rather than go on, I recommend viewing the show when it is finally released on video. It will likely be presented on public television as other filmed presentations of musicals and plays have gone that route. In meantime here are more production shots from the 25th anniversary celebration performance of 'Phantom'.

Click HERE for more photos and a review of this special production.
These photos are from Act 1 of 'The Phantom of the Opera' at Royal Albert Hall. See the next post or click HERE for Act 2 production photos. (photos: Alasatir Muir/Getty Images & NBC/Universal; post has been updated with additional photographs)


Posted by The Hopeful Traveler at 11:53 PM 0 comments