During the concert (see previous post), Norm Lewis shamelessly touted his CD release "This Is the Life

". It's first solo CD and why not advertise that copies will be sold in the lobby. As a measure of enticement, Lewis would appear after the performance to autograph copies.

It was not yet 9:30pm and it was unlikely I would be planning anything else on this cold evening, or so I thought (see next post), so why not stand in the growing line for an autograph. I first saw him perform in my first visit to New York City in 1995. "Miss Saigon

" was heading into it's fifth year on Broadway and Lewis was performing the role of John. The role has one of the more powerful numbers in the show. The song is "Bui Doi

"about the children of American soldiers and Vietnamese mothers. Again Lewis had applied his powerful voice to the show stopper.

Live from the O2 Arena on DVD or Blu-ray. 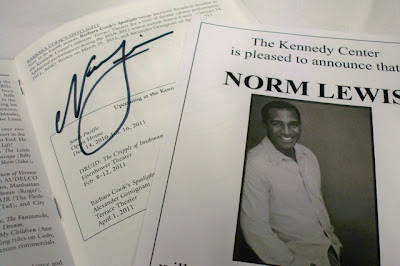 Posted by The Hopeful Traveler at 10:15 PM