How Important is a Billing in a Broadway Playbill: Lawsuit Important for 'The Great Comet'


'Natasha, Pierre & The Great Comet of 1812' has not yet officially opened on Broadway (it is currently in previews) but the production is already mired in behind-the-scenes in-fighting between producers.

A couple of weeks ago Michael Riedel wrote in the New York Post:
The Broadway community is riveted - and appalled - by what one veteran producer calls (producer Howard) Kagan's "bullyboy tactics" toward Ars Nova, the nonprofit theater that developed "The Great Comet" five years ago, and is now one of the show's many producers.

When Ars Nova complained that Kagan, a former Wall Street executive, refused to bill the show "The Ars Nova Production of . . ." as agreed in their contract, he threatened to upend their Dec. 5 benefit by scheduling the recording of the cast album that day. Cast members, including Josh Groban, are the benefit's featured attraction; if they're in the recording studio that day, they'll miss the benefit.

Playbill reported this week:
After back-and-forth discussions at Arts Nova, founding artistic director Jason Eagan, managing director Renee Blinkwolt and the "Gang at Ars Nova" (as they refer to themselves) have decided to take action. The Ars Nova board of directors voted unanimously the evening of October 27 to file suit for breach of contract - as stated in their letter to patrons - to "compel the commercial producers of The Great Comet to honor their contractural obligation to bill the show as 'The Ars Nova Production Of.'"

The suit, a copy of which was obtained by Playbill.com, names Howard Kagan alone as defendant. It was filed in New York State Supreme Court October 28.


The actors on stage, including leading man Josh Groan, has been quiet about the issue. Hope this does not delay the opening of the show and is resolved before then. Still some of the producers can't help think that this might be good advertising to get word out about the show.

Visit greatcometbroadway.com for info about and tickets to the production.
Posted by The Hopeful Traveler at 11:23 PM 0 comments

How Much Do Off-Broadway Actors Get Paid: Seeking a Pay Increase 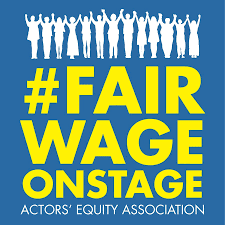 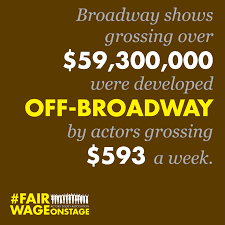 Across Broadway websites this week, news has surfaced that more than 1,000 members of Actors' Equity Association have signed an open letter seeking, what Playbill.com calls, a "historic" pay increase.

Actors' Equity is the union that represents actors and stage managers in the U.S. and is negotiating a new contract that expires on November 6. The main grievance is actors cannot make a living by working Off-Broadway. It would be hard to disagree based on the current wages.

Some will argue that acting is for the starving artist. But the pay increase also means help for the survival of theatre that is not defined as Broadway. The productions that play Off-Broadway often cannot be economically staged at or have the large audience needed for a Broadway theatre. Also so many Broadway shows were transfers of Off-Broadway productions including the hit musical 'Hamilton'.

Listen to the plea of actor Nick Westgate in the video below. Click HERE to watch more videos from the Fair Wage Onstage YouTube Channel.

Posted by The Hopeful Traveler at 10:58 PM 0 comments

It's one thing to live in a building that has a slight lean. It's another thing when the building is a 58-floor luxury tower in a city known for earthquakes, San Francisco.

Associated Press reports the Millennium Tower was completed seven years ago and has sunk 16 inches into the soft soil and landfill of the city's financial district. To make matters worse the building is not sinking evenly with a 2-inch tilt at the base and a 6-inch lean at the top. An attorney who lives on the 42nd floor paid $2.1 million for his two-bedroom apartment. Penthouses sold for more than $10 million.

Or watch the AP news report:

Posted by The Hopeful Traveler at 10:36 PM 0 comments

How Boeing Builds a 737 in Just Nine Days

Boeing expects to build 47 of their 737 jets each month next year and ramp up to 57 in 2019. Wired reports the plane often referred to as the workhorse of commercial aviation accounts for one of every three commercial flights. Boeing currently builds 42 each month. Since 1967, over 9,000 of the 737 jets have been delivered.

Here in Hawaii, fabled Aloha Airlines (1946-2008) used the 737 for its inter-island flights and also when it began flights to the US mainland.

Single-aisle jets are in such a demand that Boeing faces fierce competition from Airbus. The european maker produces the A320 and has delivered more than 6,700 of them since the plane entered service in 1984.

Many passengers today often do not know if they are flying on a 737 or not. The jet's cabin interior for coach seats three passengers on each side of the single-aisle. Other planes from both airplane makers have a similar design in the coach cabin (from Airbus: A319, A321 / from Boeing: 757). However experienced flyers will definitely know the difference.

Wired produced a video to show how a Boeing 737 jet is built in just nine days:

Posted by The Hopeful Traveler at 10:11 PM 0 comments