'Rock of Ages' and The Bourbon Room at The Venetian 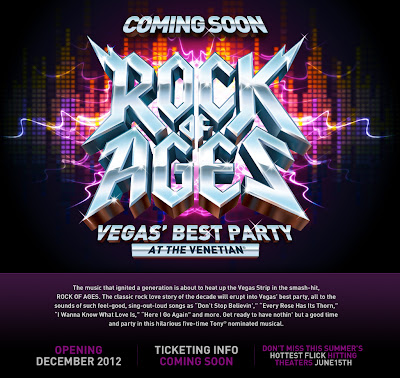 Looks like there won't be just one Broadway musical playing the Las Vegas Strip. Opening this December is the 80s jukebox musical 'Rock of Ages' at the Venetian which also houses the newly christened Bourbon Room that replicates the setting for the show. But the 'Jersey Boys' at the Paris will be riding it solo for a few months after 'Phantom...The Las Vegas Spectacular' closes in September. 'Rock of Ages' will the play the Venetian showroom occupied by Blue Man Group which is moving to the Monte Carlo.

Featuring a score comprised of classic rock songs from the 1980s, 'Rock of Ages' is the story of Drew, an aspiring rock star, with big dreams who works at the legendary Los Angeles rock club, the Bourbon Room. 'Rock of Ages' opened April 7, 2009 on Broadway where it is currently still running. Songs include "Don't Stop Believin'," "Every Rose Has Its Thorn," "Here I Go Again," "I Wanna Know What Love Is" and many others. 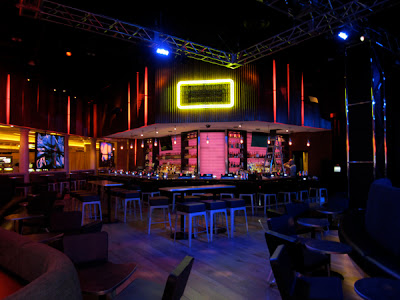 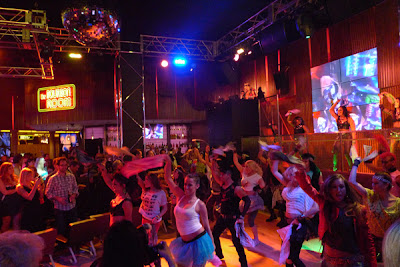 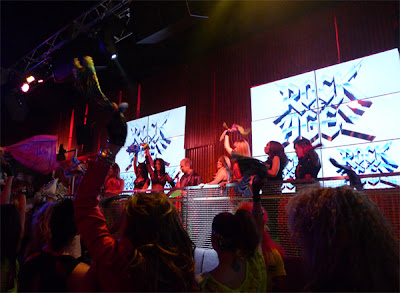 Posted by The Hopeful Traveler at 5:18 PM 0 comments

Unbeknownst to most Disneyland visitors is the legendary Club 33, a private restaurant located in the park's New Orleans Square. Members must be invited to join in addition to shelling out a $25,000 initiation fee and $10,000 in annual dues.

Disney is sending embossed invitations to the first 100 people on the club's 800-name waiting list, the first time in over a decade. All members will also gain access to 1901, a private lounge named after the year Walt Disney was born, which is set to open June 15 at Disney California Adventure. Membership also offers access to use VIP tour guides, itinerary planning services, valet parking and complimentary hotel upgrades. Member names are kept strictly confidential. But celebrities reported to have gone to the club include Tom Hanks, Michael Jackson, Christina Aguilera and Elton John.

The club, which opened in 1967 six months after Walt Disney's death, was created as a place to entertain corporate sponsors and dignitaries. Since then the club has gained a mythical status. Club 33 serves alcohol setting it apart from all other restaurants in the park. It is reported that cell phones are prohibited in dining area along with lewd conduct and inappropriate attire.

A second Club 33 is located in Tokyo, Disneyland and located off the park's World Bazaar. Members of Club 33 do not have reciprocal benefits between parks. The origin of the name Club 33 is reported to be associated with the club's address of 33 Royal Street at Disneyland's New Orleans Square.

Posted by The Hopeful Traveler at 7:28 PM 0 comments 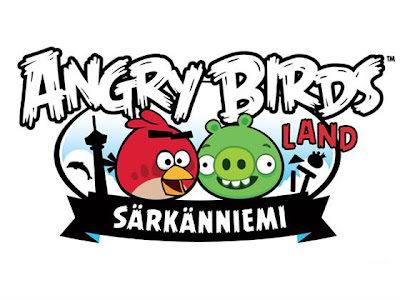 Located north of Helsinski is the Sarkanniemi Adventure Park which has partnered with Finnish-based game maker Rovio to bring the virtual world of battling birds and pigs into a theme park addition called Angry Birds Land. The park's opening would represent and official representation of the extremely popular phone app. Last year and unofficial Angry Birds attraction opened in China.

The Finland park features among its twelve attractions: a roller coaster, a lighthouse-theme mini-drop tower and a Dumbo-style spinning ride themed to the Red Bird (the hero of the Angry Birds game). The centerpiece of Angry Birds Land is a multi-level fortress tower connected by tubes and rope ladders. Visitors can also play the game on screens throughout the park.

The Angry Bird app is the number one paid app of all time and has been downloaded over 700 million times. Players use catapults to fire infuriated birds at green pigs hiding inside buildings made of planks. Angry Birds has been merchandised in toys and clothing and is rumored to become a Hollywood feature film.

Posted by The Hopeful Traveler at 11:39 PM 0 comments

Airfare on Air Force One

USA Today reports that Air Force one, a Boeing 757 used to carry the U.S. president, costs the Air Force $179,750 per hour to operate based on a Congressional Research Service report.

That's a lot of money when compared to what we feel are expensive airfares for our own airline tickets. However we as taxpayers are covering the costs of trips for official business. The article indicates that information on the cost of presidential flights are scarce but offered these figures. A European trip in 1989 cost the Air Force $1 million and a trip to Hawaii in 1990 cost $1.5 million.

These amounts are just the cost to operate the aircraft without related expenses such as food and lodging which are costly. These related costs for presidential trips in 1998 totaled $42.8 million for Africa, $10.5 million for Chile and $18.8 million for China.
Posted by The Hopeful Traveler at 11:19 AM 0 comments