The acclaimed re-imagined 25th Anniversary production of 'Les Miserables' that played a UK and world tour has spawned an American version. The North American tour opened in November 2010 at the Paper Mill Playhouse in New Jersey and scheduled to play the listed dates below.

This all-new production of the hit musical has new directors and the "re-imagined" scenery inspired by the paintings of Victor Hugo. Other tweaks include updated costumes for some of the characters.

Excerpts of the New York Times review of the tour opening:
It has been more than half a century since show tunes regularly bounced from Broadway to the Top 40 charts, so it is easy to forget that “I Dreamed a Dream” (performed by Betsy Morgan as Fantine) is not this show’s only musical treasure. As Éponine, Chasten Harmon sings “On My Own,” a sad ballad of unrequited love, with forceful poignancy. Andrew Varela brings his first-rate voice to “Stars,” Javert’s pledge to find Valjean. “Master of the House,” led by the innkeepers Monsieur and Madame Thénardier (Michael Kostroff and Shawna M. Hamic), is a rousing, cheery number, even if it does celebrate corruption and greed.
Valjean (Lawrence Clayton) has his peak musical moment with “Bring Him Home,” a prayer that Marius (played by Jon Fletcher on opening night, filling in for Justin Scott Brown, who was ill) will survive the battle. But the dazzler, more than ever, is “One Day More.” It is sung by the company, but much of its chills-producing beauty comes from the electric stage presence of Jeremy Hays, who plays Enjolras, the leader of the student uprising.
The cast is uniformly excellent, directed with both fervor and discipline by Laurence Connor and James Powell, who did the new production in London.
Mr. Clayton is a strong, imposing Valjean who does not seem particularly tortured or vulnerable at first. But that aspect of the performance pays off later; when he seems a broken man, he has fallen from great heights. Another issue arises from the color-blind casting (Mr. Clayton is African-American) that is, happily, a given in contemporary New York theater.
.
Read the Hopeful Traveler's review of the Les Miserables UK Tour and Les Miserables 25th Anniversary Concert at the O2 which includes a list of related 'Les Mis' links.
.
The new 25th anniversary production of Les Misérables will play the following cities and theatres into 2012. More production photos below this list. See the next post for a video of the US tour: 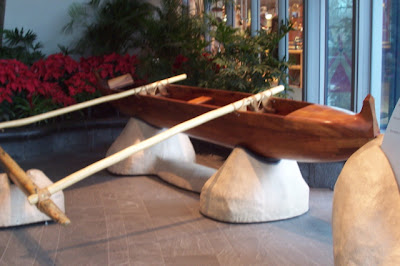 Tucked into a corner of the Smithsonian National Museum of the American Indian was the only exhibit piece devoted to the native Hawaiians (well, at least during this December 2008 visit). I asked someone at the information desk if there were other pieces about the indigenous population of the USA's 50th state and was told that exhibits are rotated and it's possible there are other artifacts not on display. 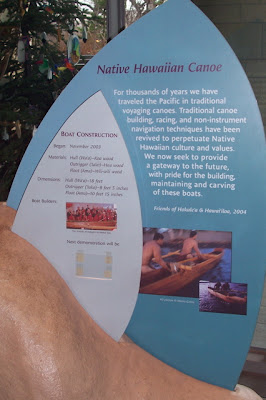 So here it is, a photo of the Native Hawaiian Canoe (pictured above) albeit one that was constructed in 2003. The canoe is made of koa, hau and wili-wili woods. The hull measures 18 feet and the outrigger is 8 feet 5 inches.

Opened in September 2004, the museum is the 16th museum of the Smithsonian Institution and was built on the last open space available on the National Mall. The five-story 250,000-square foot museum building has an unusual architecture compared to other Smithsonian museums. The curvilinear structure of textured golden-colored limestone evokes natural rock formations and is set in a 4.25-acre site with wetlands and boulders. The centerpiece of the interior is a 120-foot-high atrium. 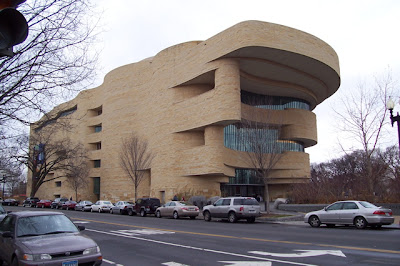 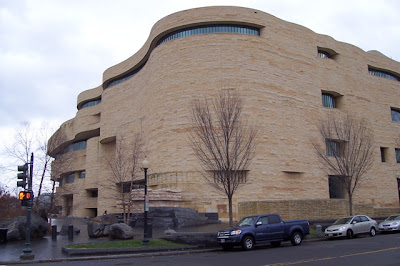 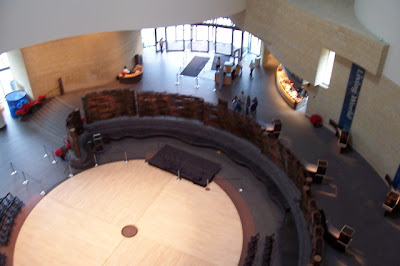 Posted by The Hopeful Traveler at 9:51 PM 0 comments

Dirty Secrets: Know This About Your Hotel Room

These are some things you should know about your hotel room as reported by AOL Travel. Below are excerpts from the article. This even goes for the best hotels.

Dirty Secret #1: Those bathroom glasses aren't as clean as you think.

Tired? Thirsty? Need a drink of water? Well before you take a sip from that glass by the sink, you might want to wash it out. Hotel housekeeping staffs are worked hard, and unfortunately for us, sometimes they take shortcuts. As was frighteningly revealed in a recent Atlanta Fox News expose, some hotel maids don't even bother to use soap when "cleaning" drinking glasses.

Protect Yourself: Don't drink from glassware in your hotel room. Instead ask for sealed, plastic glasses at the concierge desk or go with bottled water.

Most hotel rooms don't have ample seating, so life revolves around the bed, the largest surface in your average hotel room. Sitting, eating, jumping, and any number of-ahem-intimate activities can take place on top of the bedspread. Some parents even change diapers on the beds. So before you snuggle up to a throw pillow on the bed, beware.

Protect Yourself: Before you book, check reviews for reports of cleanliness on TripAdvisor.com or infestations at BedbugRegistry.com. When you arrive in your room, pull off throw pillows and comforters and set them aside. Then check the room, bed and especially mattress seams for critters and signs of their excrement (small red or brown dots).

Unless you travel with a personal assistant or you permanently wear gloves, there's no way to avoid flipping on a light switch. The bad news is that only the most conscientious maids would think to clean the light switch, or the other most-touched elements in a hotel room: the door knob, remote control, alarm clock, lamps and toilet handle. Hopefully they've cleaned the sink faucets, but you can't be sure.

Protect Yourself: Bring disinfecting wipes such as Clorox or Lysol and give the room a once-over. Treat your hotel room as if it's a public bus: Wash your hands frequently.

Dirty Secret #4: The water might not be safe, either.

Usually travelers worry about unfiltered water in foreign countries, but there is such a thing as water that has been "too" purified. On December 14th, CBS News reported that three guests of the EPIC hotel in Miami had come down with Legionnaire's disease (one later died from the infection). It turns out the hotel's high powered water purification system was filtering out chlorine from the city water supply, which allowed bacteria to grow. According to the U.S. Centers for Disease Control and Prevention, between 8,000 and 18,000 people are infected with the bacterial, Legionnaire's disease each year. It's spread through contaminated water vapors.

Protect Yourself: Don't trust the water supply. Drink bottled water; it's the only way to know exactly what water you're getting.

Dirty Secret #5: The coffee maker and ice bucket have been around.
Think twice before you brew coffee or store ice-you never know what the visitor before you did with those common hotel-room amenities. Associated Press reports a hotel manager found all sorts of things, including cigarette butts, vomit and urine, hidden in coffee makers and ice buckets.
Protect Yourself: If you use the coffee maker be sure to clean the pot and filter portion thoroughly with hot water and soap. The same goes for the ice bucket, and if the hotel offers plastic liners, all the better (but don't make that a substitute for cleaning the bucket itself).
Click here for the complete article or visit travel.aol.com.


Posted by The Hopeful Traveler at 6:12 PM 0 comments