Bing.com Travel has published a lighthearted look at poor passenger behavior when flying. The description of "Argumentative Types" has a distinctive Hawaiian feel about it.

Snorers
If anyone has ever told you that you snore, consider seeing a sleep specialist. It will be less painful than removing one of those plastic forks from your arm.

Aisle Blockage
Before takeoff, please stow all piggies underneath the setback in front of you. Sock and a little foot powder would be a nice gesture.

Immovable Objects
Have you ever had a seat mate who is wide awake refuse to let you out? This kind of boorish behavior deserves a special place in the JOPOF (Jerks on a Plane Hall of Fame).

Argumentative Types
The Big Island is best! No, Maui is the best! If there's anything worse than listening to a stupid argument, it's not being able to walk away. Keep your Haleakala-sized opinions to yourself and don't contribute to cabin pressure.

Posted by The Hopeful Traveler at 7:50 AM 1 comments

Closing!!! 'Catch Me If You Can' Musical To Close in NYC 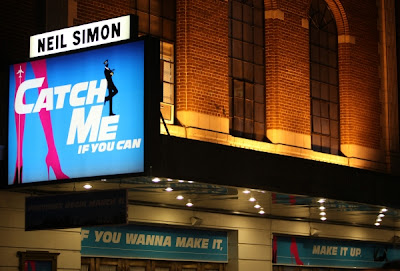 Three musical adaptations of a feature film that opened this past Broadway season have been struggling at the box office. 'Sister Act' and 'Priscilla Queen of the Desert' are not yet ready to give up their theaters just yet. But producers of 'Catch Me If You Can' announced the musical will close on Septembver 4, 2011 after 32 previews and 170 performances. The production opened at the Neil Simon Theatre on April 10.

The show budgeted at $13 million was nominated for four Tony Awards (musical, orchestrations, sound design) and won the best actor award for Norbert Leo Butz in the role of Carl Hanratty, the detective on the hunt of the young con man Frank Abagnale, Jr played by Aaron Tveit. Musical is based on the 2002 Dreamworks film that starred Leonado DiCaprio and Tom Hanks and directed by Steven Spielberg.

Despite the talents of Scott Wittman and Marc Shaiman (music and lyrics), Terrence McNally (book), Jerry Mitchell (choreography) and Jack O'Brien (director) most of whom collaborated on the hit 'Hairspray' the musical failed to attract audiences. The musical was developed in Seattle in 2009 and though changes made  for the Broadway production, the decision to keep Tveit as narrator of a story told through a 60's era television variety show was retained.

From my review of of the show: "Make no mistake -- I do not dislike this musical. Just the variety show device. Good songs are there and good performances keep the show entertaining. But this musical could have been something great." Click HERE to view more production photographs and read the full review.

Though investors are expected to lose their entire investment, a national tour will launch at the Providence Performing Arts Center in Providence, Rhode Island in the fall of 2012.
Posted by The Hopeful Traveler at 10:37 PM 0 comments

Touring Museums: Self-Improvement on the Fly

In an article titled "At Louvre, Many Stop to Snap but Few Stay to Focus" by Michel Kimmelman of the New York Times writes an insightful article about the tourists visiting museums using the landmark Paris museum as an example.

From the article: "So tourists now wander through museums, seeking to fulfill there lifetime's art history requirement in a day, wondering whether it may now be the quantity of material they pass by rather than the quality of concentration they bring to what few things they choose to focus upon that determines whether they have "done" the Louvre. It's self-improvement on the fly."

My opinion is these famous art museums are quite overwhelming for the senses. Tourists knowing their time in the city is very limited, feel it necessary to rush through works on display. The camera (where permitted) allows the visitor to wonder the museum quickly to adore the art at a later date rather than in person.

Click HERE for the full article and read more as Kimmelman answers the question "What exactly are we looking for when we roam as tourists around museums?"

Posted by The Hopeful Traveler at 7:01 PM 0 comments

Whatever you call the dates and times of performances for any Broadway show, all play an eight-performance week. The standard schedule was evening performances at 8pm Tuesday to Saturdays with matinees on Wednesday and Saturday at 2pm and Sunday at 3pm. However the producers of some Broadway shows are willing to consider curtain times outside of the normal schedule.

Some Broadway productions may now have performances on Sunday and Monday evenings or matinees outside of Wednesday, Saturday and Sunday. These changes tailored for each show are meant to expand audiences and increase box office grosses. Productions in London's West End have far more varying theatre schedules than productions on New York.

TUESDAYS AT 7
What began as an experiment in 2003 is now the norm of shows having an early curtain time on Tuesday evenings at 7pm in lieu of 8pm. With most productions ending around 9:30pm, theatergoers could now take in a show and return home early enough to have enough sleep before work or school the next morning. Long commuters, families and nine-to-fivers are the target audience to boost ticket sales for Tuesday nights.

As expected when the experiment began some audience members would arrive at the theatre at 7:45pm without looking at their ticket and only to learn that the first act was more than half over. On the flip side others complained that the early curtain time did not allow enough cushion time to arrive at the theater.

Today if there are any productions holding out on the early curtain time they would be the exception. There may be one or two shows still performing Tuesdays at 8pm but normally these may be plays whose appeal are mainly adult audiences.

"Tuesdays at 7pm" has had some side effects. The TKTS discount ticket booth in Times Square opens an hour early on Tuesdays at 2pm instead of 3pm on non-matinee days. Nearby restaurants also expect theatergoers to make early reservations at 5pm or 5:30pm. With performances ending at 9:30pm many in the audience find they can make plans for after the show.

Shows are extending the experiment further this season with early curtain times on other evenings mainly Wednesday and Thursdays. Among current shows 'The Book of Mormon' and 'Jersey Boys' offer 7pm performances on those evenings with 'Spider-Man Turn Off The Dark' offering a curtain time at 7:30pm. The Disney musicals 'The Lion King' and 'Mary Poppins' varies their evening performances based on the season. With the exception of Tuesdays at 7pm, all the evening performances for 'Billy Elliot' start at 7:30pm.

SUNDAYS AND MONDAY EVENINGS
Sunday and Monday nights used to be a wasteland for Broadway theatergoers as most shows observed the standard Mon-Sat evening and Wed, Sat and Sunday matinees. However more producers are opting to schedule performances on Sunday and Monday evenings to take advantage of the lack of competition.

Productions that offer performances on Sunday nights (usually with 7pm curtain times) and Monday evenings is particularly attractive to the theatergoer looking to squeeze in as many shows possible during a visit to New York. Sunday and Monday may allow them to take in one extra show or two.

MATINEES OUTSIDE OF WEDNESDAYS, SATURDAYS AND SUNDAYS
Summer schedules for Broadway productions in 2011 see producers offering more divergent schedules mainly playing with the dates and times of matinees. 'Rock of Ages' and soon-to-shutter 'Baby It's You!' play Friday matinees while 'Chicago' plays Thursday afternoons. This experiment is meant to only last until the end of summer. These types of matinee schedules could be more common in the future just as "Tuesdays at 7pm" is now a standard performance time.

Like Sunday and Monday curtain times, these alternative matinee performances maximize audiences by playing on days with less competition. The TKTS booth in Times Square is ready to open on at 10am should a show play a matinee outside of Wednesday, Saturday and Sunday.

LIMITS ON FLEXIBLE THEATRE SCHEDULES
There are limits on scheduling performances. Actors Equity, the labor union for stage actors and mangers, state that a matinee cannot follow a day off, since those daytime hours (e.g. Tuesday leading up to an evening performance, following a Monday day off) is primarily half of an actor's weekend. A six-show weekend (two performances on Friday, Saturday and Sunday) is seen as too demanding for the actors and crew and ongoing rehearsals also limits performance times.

LONDON THEATRE PERFORMANCE TIMES
London productions offer even more flexible schedules especially with some shows now playing Sundays, a day that was for the longest time strictly off-limits. Theatergoers should check tickets carefully. They should not be surprised to find curtain times of 7pm, 7:15pm, 7:30pm or 8pm. Check the matinee schedules of London plays and musicals and find that afternoon performances can be offered on any day of the week except Mondays though most observe matinees on Wednesday and Saturdays. Even the matinee time of 2pm is not strictly observed. Performances at 2:30pm or 3pm is not uncommon.

More unusual are musicals playing two performance times on Fridays or Saturdays with one performance starting later in the afternoon and the evening performance starting in a hour after the prior performance ends. Long-running London hits 'Mamma Mia' and 'Chicago' play Friday curtain times at 5pm and 8:30pm. 'Blood Brothers' playing the West End since 1988 offers Saturday performances at 4pm and 7:45pm.

Monday performances which are limited on Broadway are far more commonplace in London's West End.

MATTER OF CHOICE
Theatergoers who take notice of the varying schedules can actually maximize their Broadway or London experience. Knowing which days are more popular with shows can render better seats on other performance days. The schedule even offers opportunities to see more shows or even allow for alternative activities before or after the show. For the individual producers ultimately it comes down to filling those seats and building the weekly box office gross to remain profitable.

Posted by The Hopeful Traveler at 7:07 AM 0 comments