Once in a while the misfortune for one actor becomes the fortune of another. Such is one aspect of live theatre. A month ago I attended a preview performance of the Off-Broadway musical 'Death Takes A Holiday' starring British actor Julian Ovenden in his American musical debut as the title character. The New York City press reported this week that Ovenden has officially withdrawn from the production due to ongoing throat illness that prevented him from appearing in more than a dozen performances. One of those performances including opening night. 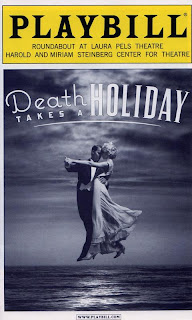 The 35-year old Ovenden played the title character of the grim repair in the dark musical. The official announcement of Ovenden's departure included this statement from the actor: "With respect to the cast and the audiences, I have decided to withdraw from the production. I have a great amount of respect for my fellow actors and I am deeply saddened to have to say goodbye."

In my review of the preview performance on July 3 I reported that "(Ovenden) makes a suave and charismatic prince and coupled with his attractive tenor he is a leading musical actor in the making." The Roundabout Theatre Company, which is presenting the new musical by composer Maury Yeston, officially announced the loss of Ovenden on August 3rd. A spokesman for the Roundabout said, "Due to Julian's indisposition he is regrettably unable to continue in the production." Kevin Earley, a Chicago actor with some New York theatre credits, who was understudying the role will continue to play the remaining performances. The musical's limited engagement ends September 4.

Initial reports indicated that Ovenden was suffering from laryngitis. Earley has performed the role since July 19 and played part of the opening night on July 21. However because Ovenden performed the role for the press during previews, all of the New York critics reviews refer to his work. Ovenden attempted to return on August 2 but could not get beyond the opening moments of the show based on reports from those in attendance. Earley stepped in after a pause.

'Death Takes A Holiday' began previews on June 10 at the Laura Pels Theatre. After the opening performance, Ovenden was though to return as early as July 25. He played Friday July 29 and the Saturday matinee on July 30 after which Ovenden sat out the remaining weekend performances.

It was announced today that PS Classics will record the musical on August 8. Earley will perform the role for the recording.  The CD Release date is not yet announced.

Click HERE to read my stage door meeting with Ovenden.

Posted by The Hopeful Traveler at 7:22 PM 0 comments

CNN reports that almost 200 square miles of the Yellow Sea off China are covered by a massive bloom of green Algae which threatens marine life as it sucks oxygen from the water. The report does indicate that the algae is not poisonous.

The algae bloom first seen in the Yellow Sea in 2007 extends in total to almost 7,400 square miles and is expected to grow. Researchers do no know what has caused the massive algae bloom. The sea of bright green has resulted in these astonishing photos. 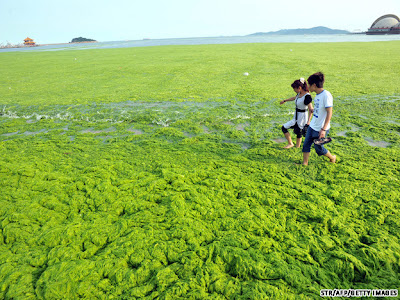 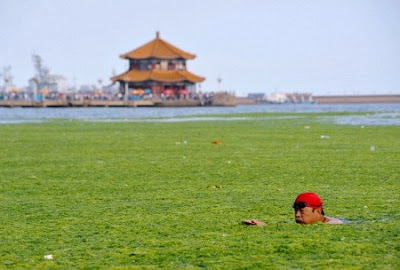 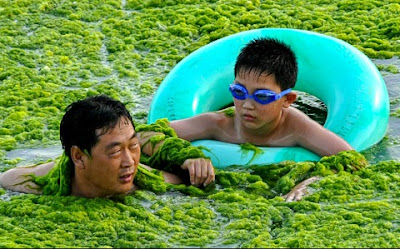 Posted by The Hopeful Traveler at 6:06 PM 1 comments

Newly released photos by Mike Segars of Reuters taken on June 16, 2011 reveals the twisted steel and other traces of 9/11 recovered from the World Trade Center. Presently these fragments sit inside Hangar 17 at John F. Kennedy International Airport in New York.

The Port Authority of New York and New Jersey is operating the World Trade Center steel program to select portions of steel recovered from the center which are donated to cities, town, firehouses and museums around the world who request it to be part of memorials being prepared for the 10-year anniversary of the 2001 attacks

Click HERE to view the complete set of photos.

Posted by The Hopeful Traveler at 5:28 PM 0 comments