In two years the current fleet of New York City taxis will start to be replaced by the Nissan NV200,  Mayor Michael Bloomberg announced this week. He added that all current taxis will be off the streets by 2018. The Nissan van beat out submissions from the Ford Motor Co. and Turkey's Karsan. The anchor of the current fleet of more than 13,200 taxis is the Crown Victoria which has been discontinued by Ford.

The minivan which won the two-year "Taxi of Tomorrow" competition features:
- Overhead window to give passengers a view above.
- Onboard outlets and charging stations.
- Fuel efficiency at 25 miles per gallon (compared to 12-13 miles per gallon for the Crown Victoria).
- Cheapest among the three finalists at a cost of $29,000 (and an anticipated $1 billion in total sales).
- Airbags & crash testing.
- Doors that slide sideways.
- GPS systems.
- An option for taxi owners to buy a wheelchair-accessible version (Bloomberg said that a new program would allow riders in wheelchairs to call for properly equipped vehicles).

Nissan reports that 70 percent of its vehicles are sold in the US and plans to manufacture the taxi van in Mexico with final touches completed at a NYC-area facility. The city is exploring a possibility of replacing the entire fleet of taxis with vehicles powered by electricity.

Posted by The Hopeful Traveler at 10:31 PM 2 comments

Most of us have either committed or been a victim of this crime. In a lapse of judgment we have bought a crappy souvenir from a vacation as a memento or bought one for an unsuspecting family member or friend. It's a well known side-effect from the joys of traveling: the need to bring something back home. 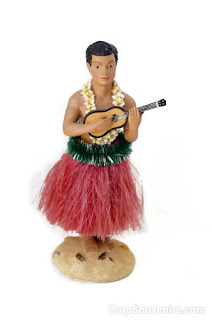 After wondering into one souvenir shop too many, travel writer Doug Lansky launched crapsouvenirs.com to allow others to document their own kitschy finds and funny comments.

On the website, Lanksy state: "When it comes to kitsch commemorative crap, most of us take the sensible route and walk right by it. But clearly there are boat loads of tourists who buy it and keep these vendors in business. If you dare to take a closer look, and do so armed with a sense of humor, you'll occasionally stumble across a gem -- a souvenir so painfully tacky you find it hard to hold back a smile. This site is meant to serve as a collection point, or perhaps a refuge, for these tackiest of mementos."

The site offers 'crap souvenirs' by category and even location on a world map. This post reveals three of the latest items from readers who have visited Hawaii, San Francisco and Paris, France. Perhaps look around your home and see if you possess any items worth sharing on this site. 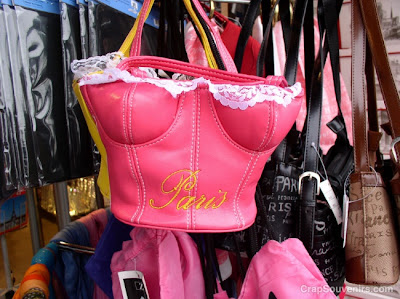 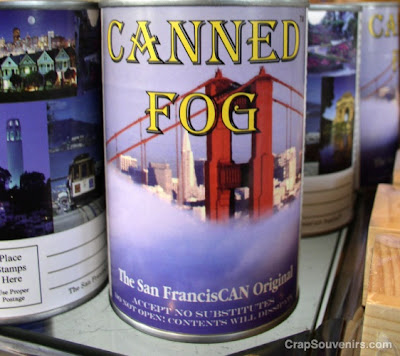 Doug Lansky is a travel writer based in Stockholm who has written books for Lonely Planet, Rough Guides and contributed to Equire, Men's Journal, National Geographic Adventure, Readers Digest and others.
Posted by The Hopeful Traveler at 10:53 PM 0 comments

When the Airline Customer is Wrong

It's common to hear the saying "the customer is always right." But often the customer can be wrong. Matt Brownell of mainstreet.com, a site that offers personal finance tips and advice, reports that every day customers behave in ways that make the lives of waiters, cashiers, customer service reps and other retail workers miserable. In one of a series of articles, flight attendants and customer service representatives offered tips on keeping the skies friendly. Below are portions from the report.


Get Off the Phone
This is a common complaint in most retail industries, but it bears repeating here: It's rude to talk on the phone while interacting with the person behind the counter. And when you're at the airport checking your bags, it slows things down for everyone.
Respect the people behind the counter enough to put your phone away when you're speaking with them. And if not for their sake, do it for the people behind you who are delayed by your chatty ways.
We Don't Want Your Germs
If there's one thing worse than seeing a passenger approach with a phone glued to his ear, it's seeing a passenger approach with a ticket in his mouth.
Passengers have their hands full with bags, and they want easy access for their ID or boarding pass, so they wind up holding it in their mouth. But handing someone a ticket that was just in your mouth is extremely gross. Put it in your pocket.
The Tray Table Is Not a Changing Table
Speaking of gross, please note that the tray tables are for eating, not for changing diapers. People will eat off that table, and it's not cleaned after every flight.
It mentions repeating: The tray tables are not cleaned after every flight, and even if they were, changing a diaper on a surface that someone is going to eat off is not OK. Be considerate of future passengers, and don't put the flight attendants in the position of having to stop you mid-diaper change.
Speaking of Babies ...
There are few air travel topics more controversial than babies and small children on planes, and if it's a headache for passengers, it's a safe bet that it's a major headache for the flight attendants who have to deal with both the crying babies and the passengers complaining about said babies.
One recommendation is bringing ear plugs if you don't have noise-canceling headphones, and passengers traveling with babies may want to bring a supply of earplugs for surrounding passengers.
Most importantly: flight attendants aren't babysitters. Flight attendants are not here for people to just pass their babies off to go to the bathroom. Airlines don't have stuff to keep kids occupied, so come prepared with games and books.
Everyone Has to Be Somewhere
When flights are delayed or overbooked, the customer service representative manning the gate can quickly become the most put-upon person in the terminal. And that's especially true if there aren't enough passengers willing to be voluntarily bumped from the flight, which means that someone with a ticket isn't getting on.
Situations like these aren't fun for anyone, and passengers have a right to feel aggrieved. But screaming will only make someone else's day worse, and if you have a pressing need to depart on time, your best bet is to politely state your case.
Take Your Seat ...
Not all seats are created equally, and if you're on a flight that isn't sold out you might be inclined to stake out better real estate -- say, a seat that's further from the lavatory or that has more leg room. But wait until the plane is in the air and the seatbelt light is off to go searching for greener pastures, because the plane can't take off until you're seated.
... And Listen to the Flight Attendants
Sure, the flight attendant said to stow your carry-on bag under the seat in front of you. But as long as it's out of the way, it doesn't matter where you put it, right? No one is going to want another persons' or their own carry-on bag sticking out and blocking their egress in a smoke-filled cabin. In other words, it's for your own safety.
The same holds true for putting your tray up and turning off your cell phone. That last one has plenty of dissidents, who argue that a single phone can't interfere with the plane's communications. But phones can also serve as a distraction during take-off and landing, when accidents are most likely.

Overhead Etiquette
"The overhead bin is shared space, and each bin should fit three people's luggage in it," says a flight attendant for a major airline. "But sometimes that one passenger will put their jacket, briefcase, and roll-aboard suitcase in there. What about the other two people in that row?"
Hogging the overhead bins is not only inconsiderate to your fellow fliers, it also makes things tough for the flight attendants, who get blamed by the other passengers when they can't find room for their own luggage.
Also know that workplace safety regulations dictate that flight attendants are only supposed to help passengers guide the bag into the compartment -- not lift it for them.
Visit mainstreet.com for other flying advice. Click here to read the full article.
Posted by The Hopeful Traveler at 9:35 PM 0 comments