The Air Up There: Germs on Airplanes

Air travelers suffer higher rates of disease infection and one study indicates the increased risk for catching a cold as high as 20%, according to a report in the Wall Street Journal.  One culprit to blame: the air that is recirculated thoughout the cabin.

Studies indicate that most jets today can capture 99.97% of bacterial and virus-carrying particles. It's when the air circulation is shut down which happens during long waits on the ground or when passengers are boarding or exiting is when infections can spread.

The report points out a study in 1979 that when a plane sat three hours with the engines off and no air circulating, 72% of 54 people on board go sick within two days. It was traced to one passenger who had the flu virus. In 2003 the Federal Aviation Administration issued an advisory that passengers should be removed from planes within 30 minutes if there's no air circulation but compliance is not required.

One thing passengers should be aware of are the "hot zones": beware of sick passengers who are two seats beside, in front of and behind you. But passengers should note that other factors come into play. The environment at 30,000 feet is extremely dry and because viruses tend to thrive in low-humidity conditions they can spread easier. The mucous membranes of people are not as effective in blocking infection when they are dry. In addition the body can tire at higher altitudes making passengers more susceptible to catching colds.

Germs can live for hours on airplane cabin surfaces. Everything from tray tables, seat-back pockets, pillows, blankets, latches, overhead bins and the lavatory can be contaminated.

The report suggests passengers take these precautions to keep germs at bay:

Clean Your Hands - Use an alcohol-based hand sanitizer frequently. Passengers often infect themselves by touching their mouth, nose or eyes.

Disinfecting Wipes - Use them to clean off tray tables before using.

Seat-Back Pockets - Avoid them. They get stuffed with used tissues, soiled napkins and trash.

Open Your Air Vent - Aim it so that air passes just in front of your face so the filtered air can direct airborne contagions away from you.

Change Seats - If you are seated near a cougher, sneezer or someone who looks like they may have a fever, changing seats may not be possible on full flights but it is worth a try. One sneeze can produce up to 30,000 droplets that be propelled as far as six feet.

Air Circulation - Notify the flight crew if the air is shut off for an extended period.

Pillows and Blankets - Avoid them.

Click HERE to view the complete article on wsj.com. The graphic below can also be viewed in the article or click on the graphic for a larger view. 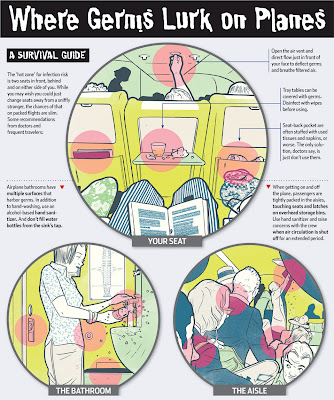 Posted by The Hopeful Traveler at 6:03 PM 0 comments

I'm not sure about you but I'd have second thoughts about staying at a hotel that was constructed in 15 days. But apparently if you need something done and need it done fast, you have to applaud the Chinese.

Boasting over 170,000 square feet of space, the hotel located in Dongting Lake in Hunan Provice is reported to be able to withstand a 9.0 earthquake. According to the International Business Times, the quick turnaround time was helped by using prefabricated modules that were put together in a factory and then placed on steel structures at the construction site.

Broad Group is the company building this project and was also responsible for the construction of the 15-story Ark Hotel in Changsha, China in six days.

Posted by The Hopeful Traveler at 11:12 PM 0 comments

And There Was One, Broadway Long Runs in Las Vegas: 'Phantom - The Las Vegas Spectacular' To Close at the Venetian in September

When 'Phantom - The Las Vegas Spectacular' closes in Sin City on September 2, only one Broadway musical ('Jersey Boys') will remain playing in one of the major hotel resorts on the Vegas strip. It's unlikely any new New York musical will set up shop in this gambling mecca anytime soon. The dream of a "Broadway West" in this desert city has evaporated.

These productions were designed to play long-term sit-down runs in Las Vegas. Other productions such as 'Footloose' at the Rio or 'Smokey Joe's Cafe' at Caesar's Palace had definitive limited runs while other played on the strip as stops for a national tour. Some off-Broadway productions ('Blue Man Group') have made it to Vegas and these titles are not included on the above list. Although 'Chicago' was announced as a limited run at Mandalay Bay, the belief is if the musical proved successful its run would have been extended.

With most of these shows logging disappointing unprofitable short runs, it's likely that only 'Mamma Mia!', 'Phantom' and 'Jersey Boys' returned their investments with smaller profits made by 'Starlight Express' and 'Chicago'.

Some critics called the selection of Broadway-type shows for Vegas a dud of a fad while others blame the current financial climate as well as the expensive economics to produce and run each show all the while maintaing the quality of a New York production.

There are some other extraneous reasons that caused the shuttering of some of these productions. The Las Vegas Hilton changed ownership in 1997 and the current owners chose to close 'Starlight Express' despite a planned five-year run. It is largely rumored that the 'The Lion King' was shuttered as Mandalay Bay wanted to accommodate a new Cirque du Soleil production based on the songs of Michael Jackson and the closing would allow for renovation of Mandalay's theater.

It was a great experiment, if one would accept that it was such, to compete against the Cirque Du Soleil productions that multiply every few years. Even Cirque found a dud by their standards with 'Viva Elvis' at the Aria Hotel which opened February 2010 and will close August 2012.

For myself seeing these productions were my main purpose for returning to Vegas every three or four years since 1993. With the announcement this month of the 'Phantom' closing, it's likely I will require another trip before September.

Of course the closings and lack of new Broadway productions on the strip may be symptomatic of the opening of The Smith Center for the performing arts. Where Vegas largely lacked a traditional theater venue outside of casinos for touring Broadway productions, visitors and residents will now have a chance to enjoy these shows outside of a gambling environment. The $470 million Smith Center is located west of the Fremont Experience. Best of all the venue presents the perfect place for the strict limited run of one or two weeks that is normal for touring musicals.

Click HERE for tickets and more info about these productions at the Smith Center.

Posted by The Hopeful Traveler at 9:48 PM 0 comments