'Ghost The Musical': Trailer & What The Press Said 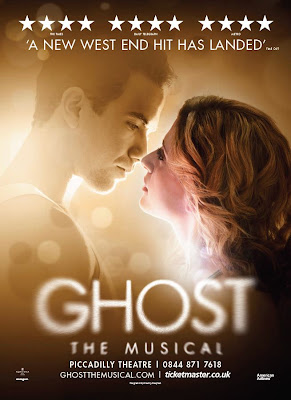 Check out the brand new official trailer for 'Ghost The Musical'. The pre-West End run finished seven weeks of performances with 100,000 people seeing the show. The show is now playing at the Piccadilly Theatre in London. Click HERE to see more videos from the musical. 'Ghost The Musical' Original Cast Recording available on CD.

From the press....
Charles Spencer for The Daily Telegraph: "This may not be a great musical, but it is a highly entertaining one that looks to set to keep audiences laughing, gasping and sniffing back the tears for a long time to come."

Paul Taylor for The Independent: "It's all seamlessly inventive and full of synaesthetic pleasures, but it can't fully compensate for the shallowness in other department."

See the previous post for production photographs. Click HERE for the full set of posts about 'Ghost The Musical'. For more info visit ghostthemusical.com.

Posted by The Hopeful Traveler at 8:33 PM 0 comments 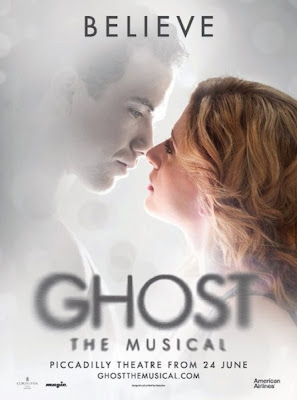 The much anticipated production of 'Ghost The Musical' officially opened at the Piccadilly Theatre in London on July 19 after previewing from June 24. The musical is currently booking for performances to January 28, 2012.

Reading about the combination of the stars and creative talents and seeing photos of the pre-West End run, this is one of the few times I was immediately taken to consider seeing a movie turned stage musical. Normally I immediately question on what purpose can be had bu adapting the film for the theatre. Until I get to see the production to give a real assessment, this post includes new production photographs. The next post will include the musical's trailer and review excerpts from the popular press. Click HERE for the full set of posts about 'Ghost The Musical' including those regarding the pre-West End tryout run.

Matthew Warchus directs 'Ghost The Musical' starring Richard Fleeshman and Caissie Levy as Sam and Molly in the roles made famous by Patrick Swayze and Demi Moore. Co-starring are Sharon D. Clarke as Oda Mae Brown and Andrew Langtree as Carl in the roles originated on film by Whoopi Goldberg and Tony Goldwyn. The musical features new music by Dave Stewart of the Eurythmics and Glenn Ballard and features the classic song "Unchained Melody" iconically associated with the film. Bruce Joel Rubin adapts his Oscar winning screenplay for the stage. 'Ghost The Musical' Original Cast Recording available on CD.

'Ghost The Musical' is a timeless fantasy about the power of love. Walking back to their apartment one night, Sam and Molly are mugged, leaving Sam murdered on a dark street. Sam is trapped as a ghost between this world and the next and unable to leave Molly who he learns is in grave danger. With the help of a phony storefront psychic, Oda Mae Brown, Sam tries to communicate with Molly in hope of saving and protecting her.  Learn more at ghostthemusical.com.

Read more »
Posted by The Hopeful Traveler at 7:12 PM 0 comments

'The Book of Mormon' Shop: I Went to New York And This Is the T-Shirt That I Bought


You know a couple of months ago I wrote a post about a website where people could post their crap souvenirs. Well I may or may not have succumbed to making such purchases on my recent visit to New York City. But in the euphoria after seeing the hysterical musical 'The Book of Mormon' all logic was pushed aside as I left with not one but three t-shirts (or tees). Now I rarely fall prey to making purchases at the concession stand at musicals other than the souvenir program and poster so the fact that I purchased these tees says something about either the quality of the musical (written by Trey Parker & Matt Stone of "South Park" fame with Robert Lopez of 'Avenue Q' fame) or my enjoyment of the show or both.

Besides the standard tee of the logo slapped on the front of the shirt, marketers have taken advantage of the humor and subject of the show for other shirt designs. This is one of the few shows in recent memory where the concession stand was still quite busy even after everyone exited the auditorium. Based on what I observed at the show, the "Hasa Diga Eebowai" was the top seller.

Visit bookofmormonbroadwaystore.com to purchase these tees and other collectibles from the show's Mission Shop. These tees sell for $30-$35 online (before shipping) and at the show. Manufactured of 100% cotton they are available in sizes small to X-Large. All photos and tee descriptions (above and below) from the 'The Book of Mormon' Mission Shop page. 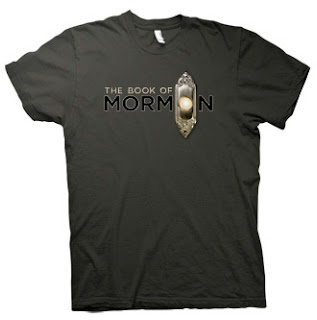 Posted by The Hopeful Traveler at 7:47 PM 0 comments