A Burst of Color in London Chinatown 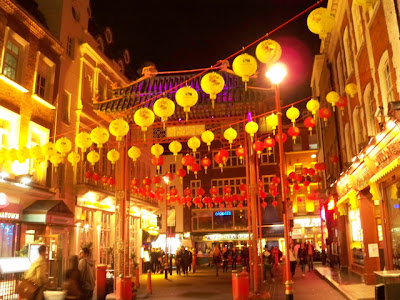 It's Sunday evening and in lieu of a theatre performance is a visit to London's Chinatown in Soho. Like a burst of color in a world of grey, the lively and festive atmosphere is entrancing. Restaurant after restaurant line the streets especially Gerrard Street, Chinatown's main avenue blocked off to cars during peak hours. The restaurant choices appear to be too many it's a wonder how diners decide. But each restaurant has their menu brightly displayed to help persuade diners. It's funny to see how many visitors were particularly fascinated with the roasted ducks hanging in a restaurant window.

The original London Chinatown was located along the Thames River and in the early 1900s catered mostly to Chinese sailors. However the aerial bombing by the Germans in World War II damaged the area and most of the population moved on. After World War II with the influx of Hong Kong immigrants led to an increased number of Chinese restaurants in London. The present location of Chinatown did not begin to be established until the 1970s. 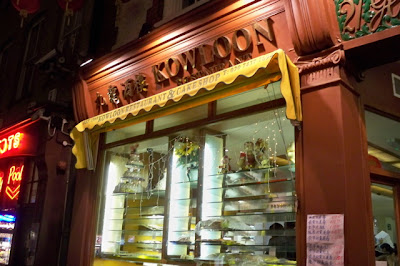 My main purpose this evening was to find something to eat before heading back to the hotel. The more I surveyed the menus, the more I realized I did not have the appetite for a full Asian dinner. So I opted to visit the Kowloon Restaurant & Cakeshop with their appetizing display of sweet and savory chinese pastries. Kowloon Bakery is known for their pineapple buns, jin deui (chewy doughnuts covered in sesame seeds and filled with sweet bean paste), nuomici (round sticky rice balls covered in coconut and filled with peanuts or sweet bean paste), marry girl cake (sweet sponge cake filled with lotus seed paste) and you tiao (golden deep-fried strips of dough). 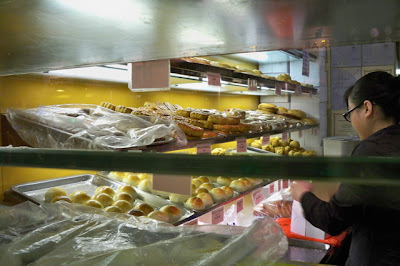 There's a sense of organization here despite a lack of a formal line. Make your choices, pay and go. So I pointed to what looked good and let myself be surprised at what the flavors would be. My choices are below and they turned out to be (left to right) a pie filled with curry, another filled with a hard-boiled egg and a crunchy and nutty but lightly sweet twisted strip of pastry. An unusual meal for a Sunday night but still good for the price of £2 (US$3).

For more info about this vibrant neighborhood, visit chinatownlondon.org. Note: I visited Chinatown again later but during the afternoon. For that post click here. 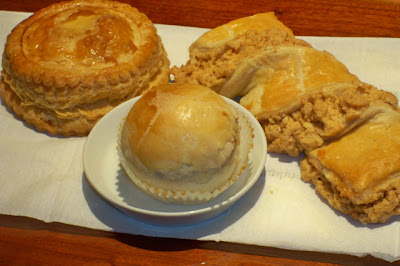 Posted by The Hopeful Traveler at 8:30 PM