A Very Potter Musical: Goin' Back to Hogwarts 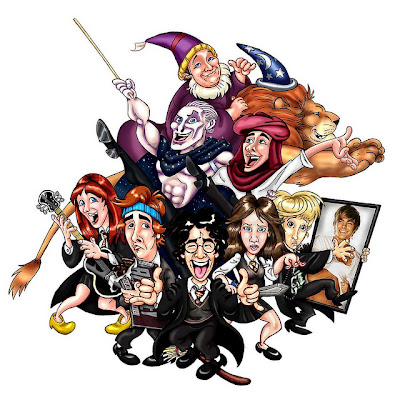 In my post about 'Potted Potter' my intention was not to deny the existence of 'A Very Potter Musical' or its sequel but just to say that a musical version about Harry Potter has not been developed or presented for Broadway or London's West End.

To satisfy those who emailed soon after writing about 'Potted', this post is to declare the existence of 'A Very Potter Musical'. Who knows? There just might be a producer brave enough to invest in development of the idea but it would likely take a huge amount of effort to ask 'Harry Potter' author J.K. Rowling to agree.

After several million views on YouTube, it's unlikely the news of this Harry Potter musical parody would be startling. After all 'A Very Potter Musical' was originally called 'Harry Potter: The Musical' when it was first performed in 2009 at the University of Michigan. When a video of the the musical was posted on YouTube the same year, the video was removed for fear of a lawsuit. The video was reposted and rechristened under its 'A Very Potter' name. The video went viral leading to Entertainment Weekly declaring the show one of ten best viral videos of the year. 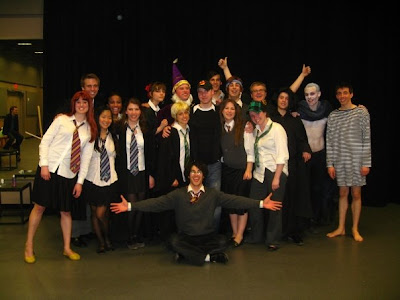 Elements, characters and plot points from the various books and movies appear in the parody. The musical tells about Harry Potter's return to Hogwarts School of Witchcraft and Wizardry as he and his classmates experience feelings of adolescence while the dark wizard Voldemort returns from the dead to take revenge on 'the boy who lived'.

A creation of StarKid Productions, a student-created theatre production group formed in Ann Arbor Michigan, the musical also offered the introduction of Darren Criss to the masses in the title role. His guest stint on the television musical "Glee"

and his Billboard #1 recording of "Teenage Dream"

from the show helped to secure him a regular role on the series and mass of new fans. Criss with A.J. Holmes composed the music and lyrics for 'A Very Potter Musical'. The book is by Matt Lang, Nick Lang and Brian Holden. The popularity of the musical proved durable enough to warrant 'A Very Potter Sequel' in 2010.

In case you are not one of millions who have already viewed a sample of the show, a video is posted above of the song "Goin' Back to Hogwarts". Visit the StarKid YouTube home page to see the entire show comprised of 23 videos.

Posted by The Hopeful Traveler at 11:21 PM 0 comments


A passenger hit the recline button and sent his seat intimately close to the lap of the guy sitting behind him.  What followed: a smack to the head, peacemakers diving about the cabin to intervene and a pair of Air Force F-16 fighter jets scrambling into the night skies over Washington.

It happened late Sunday, just after a United Airlines Boeing 767 bound for Ghana with 144 passengers took off from Dulles International Airport.

Not long after the 10:44 p.m. departure for the overnight flight, the offending seat was lowered into the offended lap, and a fight ensued. A flight attendant and another passenger jumped in between, said sources familiar with the incident who spoke on the condition of anonymity because they were not authorized to provide details.

The pilot has complete authority over the aircraft, a United spokesman said, and he decided to return to Dulles. A 767 can take off with 16,700 gallons of fuel and the full load of fuel weighs more than 57 tons. Although a 767 can get that weight airborne, it can’t land with it. The United pilot flew round for about 25 minutes, shadowed by the fighter jets, to burn off an undetermined amount of fuel.

Audio transmissions indicate that the two Air Force fighters scrambled from Andrews Air Force Base at 11:03 p.m, just as the plane reentered Washington airspace. Five minutes later, the fighter escorts took up position 1,000 feet above the jetliner as it headed toward Dulles, sources said.

Visit washingtonpost.com for the complete article. Everyone has their opinion on when or when not to recline. It's only a matter of time before it goes another step further.

Posted by The Hopeful Traveler at 7:31 PM 0 comments 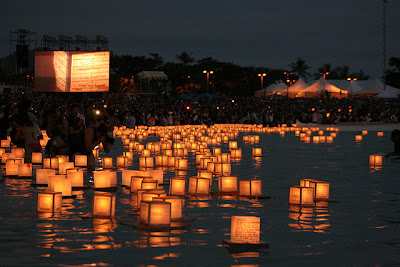 Visitors who manage a stay in Honolulu, Hawaii during the Memorial Day weekend may want to take in the Lantern Floating Hawaii ceremony.  In it's thirteenth year this was the first time I got to join in the viewing experience. It is an amazing and moving sight to see.

Taking place along the shores of Ala Moana Beach and Magic Island since 2002, prayers and messages for the dead and suffering are drifted out to sea on floating lanterns. Keehi Lagoon served as the site for the event from 1999-2001. This year a total of 3,000 lanterns were launched, the most for the event ever. Over 40,000 lined the shores this evening as the first lantern was dedicated to the victims of March's earthquake and tsunami in Japan. For many the tradition serves as an act of letting go and remembrance.

The Lantern Floating is open to everyone regardless of nationality, race, faith or lifestyle. One unique aspect of the event is it combines the observance of the upcoming Obon season and Memorial Day. In July or August, Buddhists welcome the spirits of deceased loved ones and ancestors with bon dances and other Obon traditions.  Prior to the launch of lanterns was a series of speeches, songs, hula, traditional Buddhist chant and western choral music.

Visit lanternfloatinghawaii.com for information about the tradition and future events. 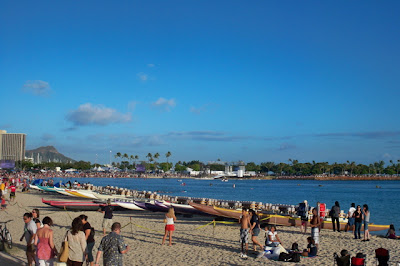 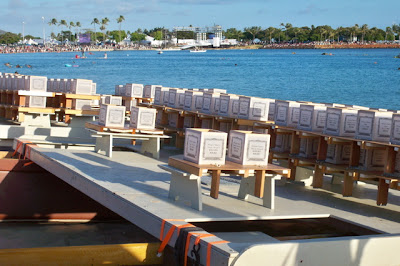 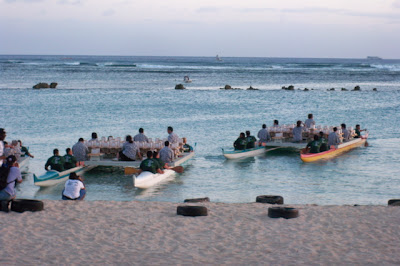 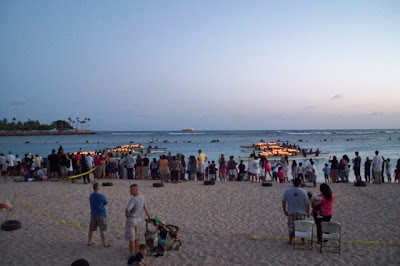 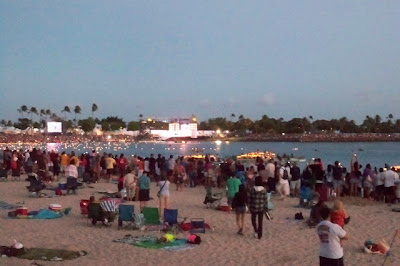 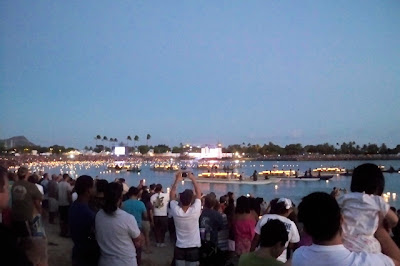 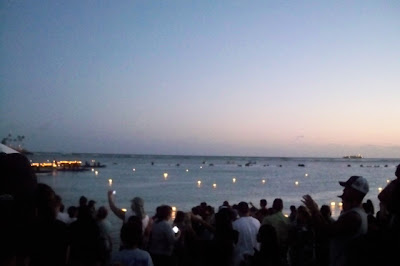 Posted by The Hopeful Traveler at 11:16 PM 0 comments