Disney's Aulani Resort: What's Up With the Cost of Parking? 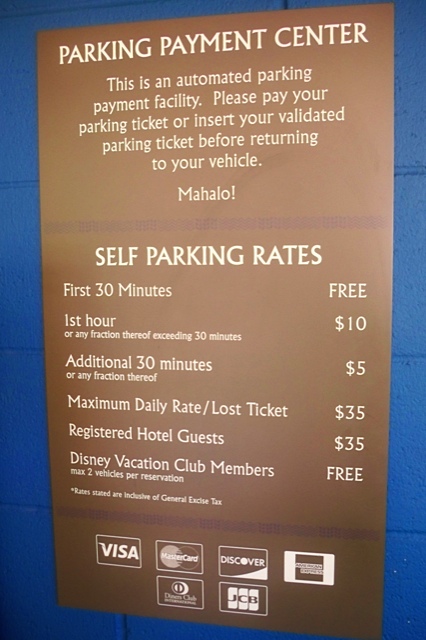 This is one in a series of posts about Disney's Aulani Resort & Spa.

Honolulu, Hawaii has some of the most expensive parking rates in the United States and it appears the cost extends to the island of Oahu's leeward side in Ko Olina. Above is the parking rates for Walt Disney Co.'s Aulani resort. Valet parking is the same price with the addition of tips. Yesterday the price for wondering around the newly opened complex cost me ten bucks. However if you make a purchase of $35 at the resort's restaurants there is complementary parking for four hours.

For hotel guests who are not Disney Vacation Club members, the true cost of the room would have to include the additional fee for parking. Since mass transit is not convenient in the area, almost all guests would require the use of a rental car. It should be noted that the self-parking requires a short walk to resort's main entrance and with the self-pay kiosk there is no parking attendant. Also it's a wonder when the resort is at capacity if there will be enough parking for all guests including those visiting to dine at one of the restaurants or to attend a conference. There is no public parking around Aulani. 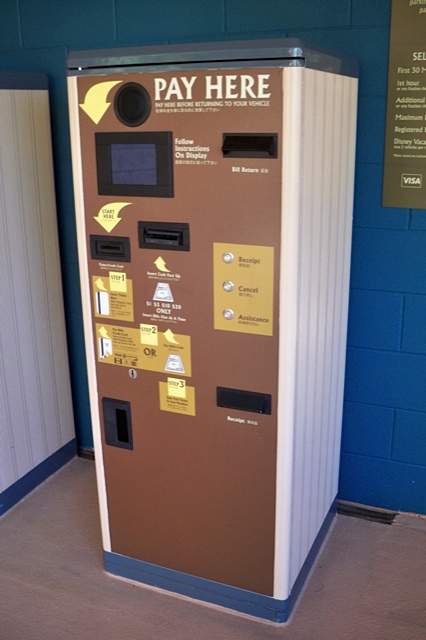 Posted by The Hopeful Traveler at 7:30 AM 0 comments

This is one in a series of posts about Disney's Aulani Resort & Spa.

The Walt Disney Co. finally opened Aulani, an $800 million oceanfront hotel and vacation club, in Ko Olina on the leeward side of Hawaii's island of Oahu after nearly three years of construction. Today I had the chance to wonder around the 21-acre property and over the next few posts will publish the photos from my visit and information about the resort. The soft opening officially welcomed guests this past week with the official opening date scheduled later this month.

Aulani translates into "messenger of a chief" or as Disney has reported, "One who speaks on behalf of a higher power." Photographed at top is the Ewa tower of the two-tower resort and below it is an L.A. Times photo overlooking the property. Below is a map and legend (click on either photo to view a larger version) located on the complex.

Thought was placed into the physical layout which creates a facsimile of a "ahupuaa" (mountain-to-sea land division). The two towers represent mountains creating a central valley filled with flowing water that connects beautifully the beach and Pacific Ocean just steps away from the hotel.

The resort is located 21 miles west of Honolulu in Ko Olina on the leeward side of Hawaii's island of Oahu. The man-made lagoons with white sandy beaches is the physical trademark of the 621-acres that is Ko Olina. Other hotels and resorts in the area are the JW Marriott Ihilani Ko Olina Resort & Spa, Ko Olina Beach Villas Resort and Marriott's Ko Olina Beach Club. Unlike Waikiki the area represents an exclusive and uncrowded option. Also located within Ko Olina is the 18-hole Ko Olina Golf Club, Ko Olina Beach Park, Ko Olina Marina and the Paradise Cove luau. Ko Olina is part of Oahu's second city of Kapolei where the town center nearby represents the closest option for shopping, dining and entertainment including a 16-theatre multiplex and the Wet'n'Wild water park.

Also of note is that Ko Olina, being on the leeward side of the island, has practically perfect sunny weather year round that is warmer and dryer than other parts of the island. 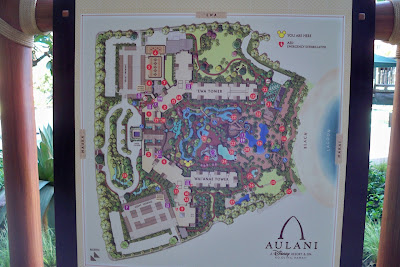 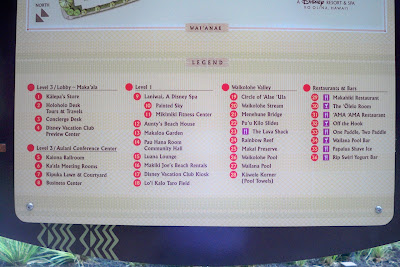 Posted by The Hopeful Traveler at 11:30 PM 1 comments 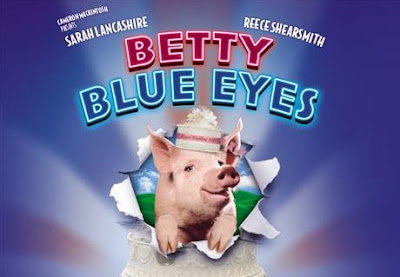 It's probably unfair to include 'Betty Blue Eyes' in my series of posts featuring the failure of stage musicals adapted from feature films. For one thing the creators did not use the same title of the film. The musical is based on the 1984 film "A Private Function". For another it's not like producers are banking on the popularity of the film to attract theatergoers. It only grossed $2.5 million in the U.S. back then.

However this musical is opening in London and it is based on a British film that starred the likes of Michael Palin, Maggie Smith, Denholm Elliott, Richard Griffiths, Liz Smith and Pete Postlethwaite. At the 1985 BAFTA (British Oscars), the film won three awards for best actress (Maggie Smith), Supporting Actor (Denholm Elliott) and Supporting Actress (Liz Smith). It was also nominated for best film and original screenplay.

But what should have signaled the likely success of the musical was the man behind it: British producer Cameron Mackintosh who has presented 'Les Miserables', 'The Phantom of the Opera' and 'Mary Poppins' in London and Broadway. Mackintosh is known for his careful hand in choosing and producing projects.

The story concerns a small Northern English town in 1947 where the inhabitants are experiencing food rationing in the United Kingdom. Some town businessmen decide to raise a pig, illegally, to serve at an elite banquet to celebrate the royal wedding of Princess Elizabeth to Prince Philip. But the pig is stolen by a local chiropodist and encouraged by his wife. Meanwhile a food inspector is determined to stop the illegal activities.

From Michael Billington's review in The Guardian: This witty and delightful adaptation strikes me as better than the original (film). It would be unfair to say that a silk purse has been made out of a sow's ear but the show's creators preserve the satire on small-town snobbery, greed and racism from the Alan Bennett-Malcolm Mowbray movie script while sharpening the storyline and using music genuinely to enhance character.

In news reports Mackintosh said "It is very curious - after such amazing reviews and positive word of mouth, no-one knows the real reason why Betty couldn't find a bigger audience. We have been consistently been playing to just over 50 percent but it just isn't enough to cover the costs. Of course I'm disappointed but I'm not despondent, I am enormously proud of Betty. I know that she will have her day and another life."

George Stiles (music) and Anthony Drewe (lyrics) composed the score. They are credited with augmenting the original score of 'Mary Poppins' with additional songs for the stage version that premiered in London and still running on Broadway. The musical's book is by Ron Cowen and Daniel Lipman. A musical cast recording is planned for release on iTunes and on CD. Though the show lacked a major star, one interesting piece of trivia is that Australian pop singer Kylie Minogue provided the voice of Betty the Pig (on stage an animatronic creation). More info at bettyblueeyesthemusical.com.


Read more »
Posted by The Hopeful Traveler at 8:27 PM 0 comments 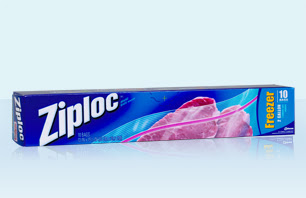 I wrote a post a few days ago about bottled water placed in freezer bags in checked bags. It got me thinking about the use of the various sizes of such freezer bags as a packing tip. We all use the quart and gallon size bags with regular use. But did you know that companies such as Ziploc also manufacture two-gallon size freezer bags. The two gallon size is perfect for shoes and clothing especially mens pants.

These freezer bags allow you to neatly pack pack a bag and makes it easier to re-shuffle items within a bag. Best of all you can see everything at a glance. One hidden benefit is that should airport security need to open your checked bag, they can see its contents without having to open each bag or mess up the contents. Other benefits include keeping everything clean from any liquids and they can be re-used. I normally label the bags I use for shoes or laundry since their re-use is limited.

Anything that can leak should be placed in its own separate bag. Cologne and perfumes should be double bagged. Should they leak, their aroma is more contained. After placing each liquid toilettes in separate bags then place all of them in a larger freezer bag along with other other non-liquid personal items. It'll help when you unpack. By the way gels such as a deodorant can also expand and leak during a flight.

It's worth repeating that freezer bags should be used rather than storage bags due to the thickness of the plastic. Ziploc packages the quart with 20 bags in a box, the gallon with 15 and the two-gallon with 10. The quart and gallon are often discounted during store sales. Less so the two-gallon bag.

Posted by The Hopeful Traveler at 8:00 PM 0 comments