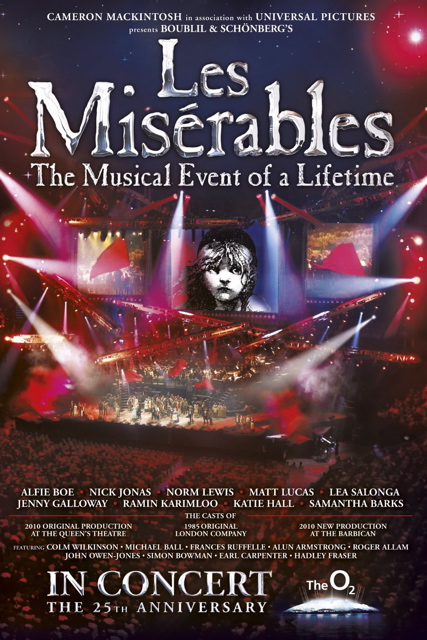 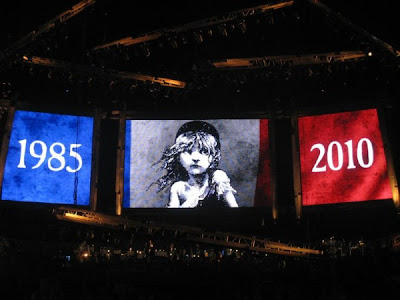 A theatrical event of extraordinary proportions, the concert to celebrate the 25th anniversary of the London premiere of the musical ‘Les Miserables’ was presented in movie theaters across the USA last night. Anyone not able to witness the presentation missed one of the most exciting stage (or in this case, cinema) events of the year.

Alfie Boe showed awesome control of his operatic tenor in the role of Valjean and delivered a full-throttle vocal intensity only when absolutely necessary. His inspirational rendition of “Bring Him Home” stopped the show. It appeared Boe was sincerely touched by the enthusiastic standing ovation of the over 18,000 in attendance at London’s O2 arena. No doubt this performance will bring Boe a whole new audience and further respect from the long-time admirers of his work.

Norm Lewis has always deserved a visible star-vehicle. After many years of trotting the boards in supporting roles on Broadway, he has finally achieved it as Javert in this concert version. Many will now have witnessed his astonishing voice. Lea Salonga, no longer the petite ingénue of ‘Miss Saigon’, is showing maturity in her performance style. Probably cast for her popularity among musical theater fans, I have a slight preference for Madalena Alberto’s performance of the role at the Barbican Theatre among the three Fantines in performances in London at the time. 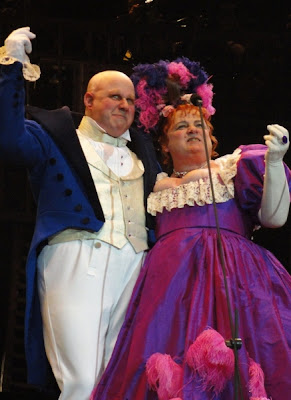 Matt Lucas, the character actor from British television and film was a revelation as Thenardier. Many may not know he filled the dual roles of Tweedledee and Tweedledum in the 2010 Tim Burton directed version of Alice in

. He, along with Jenny Galloway as Madame Thenardier, did not pander excessively to the audience.  There is a challenge in retaining the characters’ villainous origins from the Victor Hugo novel

in spite of their purpose of delivering comic relief in the musical. These Thenardiers were unique and, as usual, audience favorites.

I’m gonna say it now since I rarely hear it argued. Eponine is not supposed to be so beautiful. Despite the character’s longing for Marius, there are specific reasons why he chooses Cosette instead. Samantha Barks is indeed a stunning looker. But at least she showed her acting chops to deliver a theatrical version of “On My Own”. Too often other actresses deliver a whiny or stiff performance.

, Ramin Karimloo was a handsome and strong-voiced Enjolras. Nick Jonas may not be equal in voice to his co-performers but he with Katie Hall made for a romantic and youthful Marius & Cosette.

The concert directors deserve credit. Knowing the entire cast would be subject to massive close-ups on the three huge video screens and then in wide-screen cinemas, they were sure all the actors carefully performed with restrained facial expressions. The slightest overacting would have distracted from the event.

A few may render some performances lackluster due to the format. But such is the constraints of a concert production. One could visibly notice that the ensemble were on the verge of acting out the roles in full theatricality if not for the reminder of the microphone in front of them.

To add the feeling of a theatre performance, actors were costumed in either designs from the original production or the 25th Anniversary UK tour. The production design was enhanced with a multi-level set to accommodate the 500-member cast, orchestra and choir. Actors only appeared on stage when required. In lieu of the building of the barricade, the massive lighting tracks descended and tilted complemented by spectacular lighting effects.

Video projections from the stage version added further drama to replace scenes that could not be conveyed in a concert environment. Among these were Valjean saving a man pinned under a runaway cart and his trek through the Paris sewers.

Overall only minor cuts were made from the full theatrical version. For example, the death of Gavroche was excised completely. But none of the cuts hurt the final product.

The most thrilling pleasure of the evening were the finales. First on stage were not one, two or three but four Jean Valjeans comprised of Colm Wilkinson (the original), Simon Bowman (Queen’s Theatre cast), John Owen-Jones (Barbican Theatre cast) and Alfie Boe. Their quartet of “Bring Him Home” is a version that needs to be preserved. It was utterly beautiful, moving and the highlight of the evening.

, the O2 concert cast and then to everyone’s astonishment members of the original London cast of twenty-five years ago. Further excitement brewed from the audience once the 1985 cast began performing “One Day More”.

Speeches by producer Cameron Mackintosh and authors Claude-Michel Schonberg (composer), Alain Boublil (original French lyrics) and Herbert Kretzmer (lyrics) capped the evening before hundreds of students from the ‘schools’ version of ‘Les Mis’ paraded through the venue pefroming “Do You Hear the People Sing”. A bit of soap opera happened behind the scenes with a dispute between original director Trevor Nunn and Mackintosh that he and co-director John Caird did not appear.

In the Regal Cinemas in Honolulu, Hawaii it almost felt like attending a live performance. Among the hundreds in the theater, many joined in applause with the onscreen audience. The event deserved to be shared in a movie theater. A presentation on television would have watered down the presentation.

If the end credits hold true, we can finally expect a big screen adaptation of ‘Les Mis’ coming soon. As of this writing a U.S. release or NTSC version of the concert on DVD still has not been scheduled. The Region 2 version for the U.K. is to be released at the end of November.

This is the kind of event remembered for days to come and talked about to relive the memories. Few theatrical events touch the heart like this one. The joyous feeling this one delivered will be unmatched for a long time to come.

Posted by The Hopeful Traveler at 6:00 AM